A police officer who shot the leader of a militant Antifa group was “legally justified” in a January 11 shooting at a Eugene, Oregon middle school.

Charles Landeros, 30, was fatally shot in the head by officer Steve Timm at the Cascade Middle School, where Landeros’ daughter is a student. Landeros can be seen on bodycam footage pulling a gun during a struggle with Timm and another officer, Aaron Johns following a custody argument.

Landeros went to the school that day over a conflict with his daughter’s mother. He had enrolled the girl in the school earlier that week without telling his former spouse, but school officials later learned that the girl’s mother had the sole authority to decide which school the girl attended.

At some point, Landeros was told to leave the school because he stopped answering the officers’ questions. He was warned that he would be arrested if he didn’t leave, the district attorney said.

Police body camera footage shows Landeros refused to leave the school because he believed only the principal had the authority to force him from the campus. He then sees his daughter walk into the hallway and repeatedly yells for her to “go.” –Oregon Live

According to district attorney Patty Perlow, Timm and Johns tried to arrest Landeros on suspicion of disorderly conduct and trespassing – pushing him outside the front doors. Landeros pushed back, and the pulled a handgun as he and Johns begin to struggle. Landeros can be seen pointing the gun at Timm and firing two rounds which miss the officer. Timm returned fire once and hit Landeros in the head right in front of his daughter. 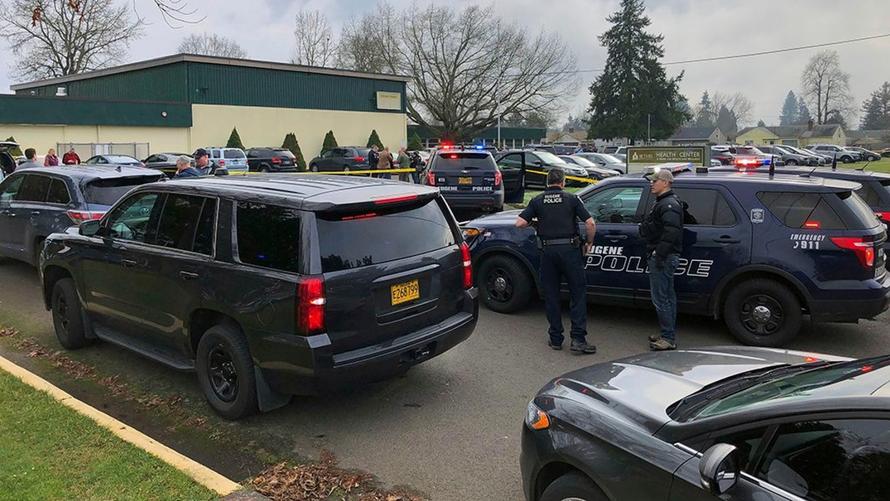 Police officers work the scene where a suspect was shot at a Cascade Middle School in Eugene, Ore, on Friday, Jan. 11, 2019. (Chris Pietsch/The Register-Guard via AP)

“It is unknown why Charles Landeros chose to use deadly force in this circumstance, but he clearly had no regard for the lives of the police officers or the students or staff present, including his child,” said Perlow in a statement.

“Officer Timm saved the life of Officer Johns, himself and perhaps many others given the number of rounds Charles Landeros had loaded in his weapon. There is no clearer circumstance that the use of deadly force is justified than this.”

Landeros founded the “community Armed Self-Defense” Antifa group, according to Ammoland, and was wearing a “smash the patriarchy and chill” shirt during the incident.

The 9mm pistol Landeros pulled was bought legally in December by his sister-in-law, according to Perlow, and he was a concealed handgun license holder. He had a round in the chamber, 18 rounds in the magazine, and another loaded magazine on his gun belt. In his car, police found another magazine. Landeros was also wearing a backpack that had bullets for a different caliber firearm.

Landeros’ family has called for an independent investigation into his killing, noting that he was an honorably discharged Army veteran and the father 10 and 12-year-old daughters.

In mid-January, a heated protest broke out over the incident in which anti-police demonstrators faced off with counter-protesters supporting the police.

One Cascade Middle School parent at the protest defended the officers.

“They’re saying disarm cops, they’re saying that was murder. It wasn’t murder. [Landeros] brought a gun to my kid’s school,” said Karen Neurotch. “They didn’t get calls because their kids don’t go here. I got a call saying my kid was terrified because they heard shots fired.”

Community Armed Self Defense’s Facebook page said that they could not count on the police to protect marginalized people, and that firearms help marginalized groups protect themselves, the Daily Emerald reported.

“The police are not here to protect us. They are more likely to harm us themselves than they are to ‘serve or protect’ us,” the group wrote on their Facebook page description.

The Civil Liberties Defense Center, another of the activist groups Landeros belonged to, posted about the shooting on their Facebook page. The post said Landeros left behind two daughters, ages 12 and 10, a partner, and numerous family members and friends. The group also said it will raise money to investigate the shooting on their own. –KGW

Officers Timm and Johns have been with the Eugene Police Department for 14 and 17 years respectively.