The next time parking enforcement officers use chalk to mark your tires, they’re acting unconstitutionally. 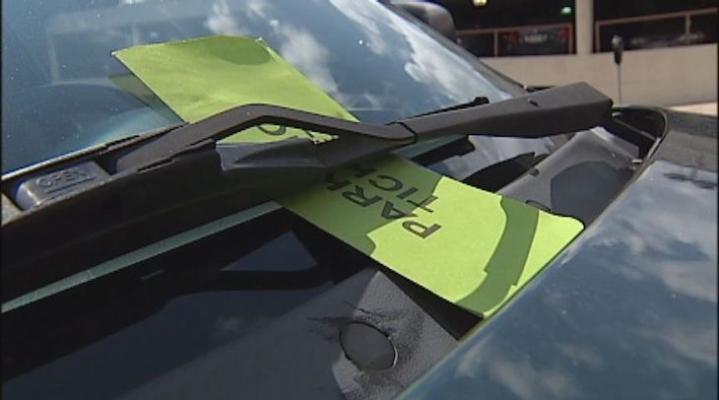 A federal appeals court ruled Monday that “chalking” is a violation of the Fourth Amendment.

The case was brought by Alison Taylor, a Michigan woman whom the court describes as a “frequent recipient of parking tickets.” The city of Saginaw, Mich., like countless other cities around the country, uses chalk to mark the tires of cars to enforce time limits on parking.

By the time Taylor received her 15th citation in just a few years, she decided to go after the city — and specifically after parking enforcement officer Tabitha Hoskins.

Hoskins, Taylor alleged in her lawsuit, was a “prolific” chalker. Every single one of Taylor’s 15 tickets was issued by Hoskins after she marked a tire with chalk, and then circled back to see if Taylor’s car had moved. That chalking, Taylor argued, was unconstitutional.

“Trespassing upon a privately-owned vehicle parked on a public street to place a chalk mark to begin gathering information to ultimately impose a government sanction is unconstitutional under the Fourth Amendment,” Taylor’s lawyer, Philip Ellison, wrote in a court filing.

A three-judge panel of the U.S. Court of Appeals for the 6th Circuit unanimously agreed. Chalking tires is a kind of trespass, Judge Bernice Donald wrote for the panel, and it requires a warrant. The decision affects the 6th Circuit, which includes Michigan, Ohio, Kentucky and Tennessee.

The Fourth Amendment protects people from “unreasonable searches and seizures.” To determine whether a violation has occurred, the court first asks whether the government’s conduct counts as a search; if so, it asks whether the search was reasonable.

The court found that chalking is indeed a “search” for purposes of the Fourth Amendment, because government officials physically trespass upon a constitutionally protected area to obtain information. Just as the Supreme Court ruled in 2012 that sticking a GPS tracker to a car counted as a “search,” so is marking a tire with chalk to figure out how long it has been parked, the court wrote.

And that search wasn’t reasonable, the court said. The city searches vehicles “that are parked legally, without probable cause, or even so much as ‘individualized suspicion of wrongdoing’ — the touchstone of the reasonableness standard,” the court wrote.

Fascinating CA6 opinion today holding that chalking a tire for parking enforcement — to see if the car had been there a while in violation of parking rules — violates the 4th Amendment. Not sure where I come out on it, but fun issue. Here’s a thread. https://t.co/2MtCtAb9e6 #N pic.twitter.com/GOGjL0RUGk

“We don’t think everyone deserves free parking,” Ellison, the attorney who brought the case, told The Associated Press. “But the process Saginaw selected is unconstitutional. … I’m very glad the three judges who got this case took it seriously. It affects so many people.”

Law professor Orin Kerr, noting that he had never seen a chalking case before, said parking enforcement officers could sidestep the constitutional issue altogether by simply taking a photo of the car rather than using chalk. “That way parking enforcement can learn the placement of the car [without] physically marking it,” Kerr wrote.

On her Facebook page, Taylor — the recipient of frequent parking tickets — delighted in the fact that future law students would get to read about her case while studying the Fourth Amendment. “That’s definitely the most exciting part!” she wrote. “I’ve helped change the law.”