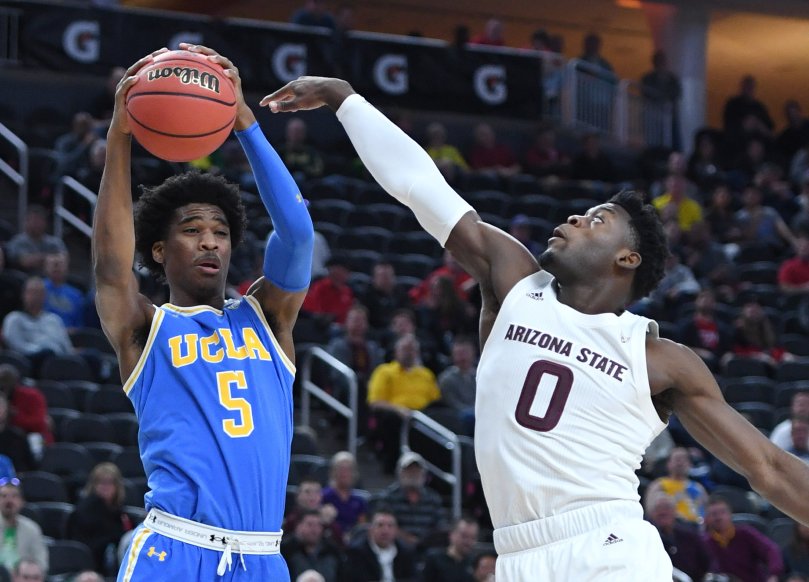 Chris Smith #5 of the UCLA Bruins looks to pass against Luguentz Dort #0 of the Arizona State Sun Devils during a quarterfinal game of the Pac-12 basketball tournament at T-Mobile Arena on March 14, 2019 in Las Vegas, Nevada. (Photo by Ethan Miller/Getty Images)

The malaise afflicting the Pac-12’s major sports cannot be traced exclusively to missteps and miscalculations at the conference office.

USC and UCLA are dragging everyone into their shared morass of losing on the field, underperforming on the court, mid-season coaching dismissals, 5-star attrition, federal bribery charges, pay-for-admissions scandals and much more — some of which zooms past embarrassing and into the realm of heinous.

And now, folks, there’s a simmering academic problem in Westwood.

The UCLA basketball team is in danger of being ruled ineligible for the NCAA Tournament in coming seasons under new coach Mick Cronin.

Yep, just when it seemed like nothing else could go wrong for the conference — like it had encountered every form of woe imaginable, from the cupcakes on the sideline in Seattle to the federal courtroom in New York to the Louis Vuitton outlet in Hangzhou— the marquee basketball program at one of the finest public universities in the world is struggling in the classroom.

The APRs are the best judge of academic performance in major college sports, a close-to-real-time means of holding head coaches accountable.

Each team receives a single-year APR score, which is then grouped with prior results to form a multi-year score that determines postseason eligibility.

Not only did the Bruins post the lowest multi-year score in the conference by a significant amount, they’re just three points above the cutoff line.

If the multi-year score unveiled next spring drops below 930, the Bruins seemingly would be ineligible for March Madness in the 2020-21 season, according to an explanation of the process by NCAA spokesperson Michelle Brutlag Hosick.

“The (Committee on Academics) has set the achievement of 930 APR as a requirement for participation in championships, similar to a winning record,” Hosick wrote in an email.

“Unless the postseason ban is waived or avoided through the use of a filter (more information on that here), teams that don’t achieve the 930 will not participate in the postseason from the first time their multi-year APR falls below that benchmark.”

The Bruins’ football program is also struggling with the APR, which awards points for the eligibility and retention of each athlete.

The attrition caused by the coaching change — from Jim Mora to Chip Kelly — drove UCLA’s single-year score all the way down to 881, which undercut what had been a solid multi-year score.

The football program’s multi-year APR stands at 948, which is also the worst in the Pac-12 but impressive  compared to the basketball number.

On both fronts, the scores are fairly stunning for an institution of UCLA’s stature, with so many academically-inclined players and so many support resources at their disposal.

The school issued the following statement to the Hotline:

“The APR numbers for football and men’s basketball in no way reflect the commitment to academic excellence that has always defined UCLA. We are disappointed in where our teams currently stand, and are proactively working with our coaches and student-athletes to move in the right direction.”

There is a significant obstacle for men’s basketball, at last in the short term:

The multi-year score that determines postseason eligibility is based on a rolling four-year average of the single-year scores.

In the multi-year score announced next spring, UCLA’s 942 will drop out of the calculation and be replaced by the Bruins’ single-year score for the 2018-19 academic year.

Based on the Hotline’s rudimentary math skills, the Bruins would drop below the postseason cutoff (930) if their single-year score is 928 or lower.

And because the dreadful 907 and 905 scores are carried together through the 2019-20 APR window, as well, the precarious position isn’t a one-time issue.

How in the name of the U.S. News rankings did UCLA slide into this APR quagmire?

The APR measures eligibility and retention: Athletes must remain in school and in good academic standing for each academic term in order to receive the maximum point value for the full academic year.

The challenge is more daunting for schools on the quarter system, where winter quarter exams typically overlap with the conference basketball tournaments and the start of the NCAAs, thereby increasing the risk that poor grades will impact eligibility.

What’s more, the NBA Draft process — when players are mulling their options and working out for teams — transpires during the spring quarter.

But for semester schools, much of the early-entry process, including the critical NBA Draft Combine in the middle of May, unfolds after the conclusion of the academic year.

The NCAA has tweaked the APR scoring system to account for the difference.

• But each player at a quarter-system school can earn a maximum of eight points: Two points for eligibility/retention in the fall quarter; two points in the winter quarter; and four points in the spring quarter (or whichever is the last quarter for enrollment).

Not only do players at quarter-system schools have more opportunities during the year to earn points — or lose them — but the weighted scoring places more emphasis on the quarter in which the draft process peaks.

Because of the small sample size in basketball, it only takes one or two players losing points in the spring quarter to send a team’s single-year APR into treacherous territory.

(The number of points earned is divided by the total points possible, then multiplied by 1,000 to determine the team’s score.)

All that said, UCLA is hardly the only school that must navigate the draft process against the backdrop of the quarter-system scoring process.

Oregon is on the quarter system and has a multi-year basketball APR of 958.

Washington is on the quarter system and has a multi-year score of 986.

In fact, the Huskies achieved perfect scores (1,000) in back-to-back years when they had players leave school for the draft.

We might not have to wait for the release of the APRs next spring for a resolution. The university will have an accurate picture of the basketball program’s single-year score at the close of the academic year in mid-June.

The key questions to be answered at that point:

Exactly when did Kris Wilkes stop attending school and was he in good academic standing at the time?

Exactly when did Jaylen Hands stop attending school and was he in good academic standing at the time?

Did Moses Brown enter the draft and what was his academic standing in the spring quarter?

Did any other players lose points at any time during the academic year?

Based on the Hotline’s very rough estimate, the Bruins are headed to the wire in a game they should never have played in the first place.