In 2002, the U.S. military tapped Lt. Gen. Paul Van Riper to lead the red opposing forces of the most expensive, expansive military exercise in history. He was put in command of an inferior Middle Eastern-inspired military force. His mission was to go against the full might of the American armed forces. In the first two days, he sank an entire carrier battle group. 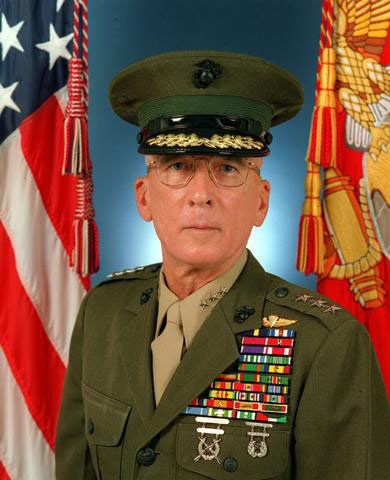 The exercise was called Millennium Challenge 2002. It was designed by the Joint Forces Command over the course of two years. It had 13,500 participants, numerous live and simulated training sites, and was supposed to pit an Iran-like Middle Eastern country against the U.S. military, which would be fielding advanced technology it didn’t plan to implement until five years later.

The war game would begin with a forced-entry exercise that included the 82nd Airborne and the 1st Marine Division.

When the Blue Forces issued a surrender ultimatum, Van Riper, commanding the Red Forces, turned them down. Since the Bush Doctrine of the period included preemptive strikes against perceived enemies, Van Riper knew the Blue Forces would be cominfor him. And they did.

But the three-star general didn’t spend 41 years in the Marine Corps by being timid. As soon as the Navy was beyond the point of no return, he hit them and hit them hard. Missiles from land-based units, civilian boats, and low-flying planes tore through the fleet as explosive-ladened speedboats decimated the Navy using suicide tactics. His code to initiate the attack was a coded message sent from the minarets of mosques at the call to prayer.

In less than ten minutes, the whole thing was over and Lt. Gen. Paul Van Riper was victorious.

How did 19 ships and some 20,000 U.S. troops end up at the bottom of the Persian Gulf? It started with the OPFOR leadership. Van Riper was the epitome of the salty Marine Corps general officer. He was a 41-year veteran, both enlisted and commissioned, serving everywhere from Vietnam to Desert Storm. Van Riper attended the Marine Corps Amphibious Warfare School, The College of Naval Command and Staff, Army War College, and the Army’s Airborne and Ranger Schools.

In fact, the three-star general had been retired for some five years by the time he led the Red Forces of Millennium Challenge. He was an old-school Marine capable of some old-school tactics and has insisted that technology cannot replace human intuition and study of the basic nature of war, which he called a “terrible, uncertain, chaotic, bloody business.”

When Van Riper told the story of Millennium Challenge to journalist Malcolm Gladwell, he said the Blue Forces were stuck in their own mode of thinking. Their vastly superior technology included advanced intelligence matrices and an Operational Net Assessment that told them where the OPFOR vulnerabilities were and what Van Riper was most likely to do next out of a range of possible scenarios. They relied heavily on that. When the Blue took out Red’s microwave towers and fiber optics, they expected his forces to use satellite and cell phones that could be monitored.

Not a chance. Van Riper instead used motorcycle couriers, messages hidden in prayers, and even coded lighting systems on his airfields — tactics employed during World War II.

“I struck first,” he said in “ Blink: The Power of Thinking Without Thinking,” written by Gladwell in 2005. “We did all the calculations on how many cruise missiles their ships could handle, so we simply launched more than that.”

In fact, Van Riper hated the kind of analytical decision making the Blue Forces were doing. He believed it took far too long. His resistance plan included ways of getting his people to make good decisions using rapid cognition and analog but reliable communications.

The other commanders involved called foul, complaining that a real OPFOR would never use the tactics Van Riper used — except Van Riper’s flotilla used boats and explosives like those used against the USS Cole in 2000.

“And I said ‘nobody would have thought that anyone would fly an airliner into the World Trade Center,'” Van Riper said in reply. “But nobody [in the exercise] seemed interested.”

In the end, the Blue Forces were all respawned and Van Riper was prevented from making moves to counter the Blue Forces’ landing. He had no radar and wasn’t allowed to shoot down incoming aircraft he would have otherwise accurately targeted. The rest of the exercise was scripted to let the Blue Force land and win. Van Riper walked out when he realized his commands were being ignored by the exercise planners. The fix was in.

The three-star wrote a 21-page critique of the exercise that was immediately classified. Van Riper spoke out against the rigged game anyway.

“Nothing was learned from this,” he told the Guardian in 2002. “A culture not willing to think hard and test itself does not augur well for the future.”

Source: by Blake Stilwell | We Are The Mighty