‘This is real. Put food, water and tools up every week because time will come when everything is tightly rationed. That’s when you’ll need a well established indoor food garden, beyond the view of .gov and grabby neighbors’ 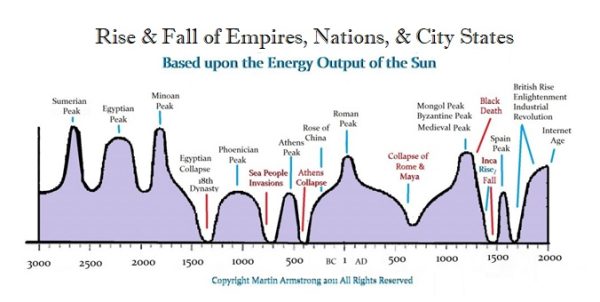 QUESTION:  Professor Valentina Zharkova gave a presentation of her Climate and the Solar Magnetic Field hypothesis at the Global Warming Policy Foundation in October 2018. The information she unveiled should shake/wake you up.

Zharkova was one of only two scientists to correctly predict solar cycle 24 would be weaker than cycle 23 — in fact, only 2 out of 150 models predicted this.

Zharkova’s models have run at a 97% accuracy and now suggest a Super Grand Solar Minimum is on the cards beginning 2020.

Reduction of heat from the sun to 60%! 97% probability!
Have Mr. Armstrong included such data into Socrates?

THANKS much for the work and viewpoints.

Raphael … one of the appreciative readers.

ANSWER: I have included the raw data, not Professor Zharkova’s theory. Our computer accurately forecasts that decline in Solar Cycle #23 and it is projecting a major decline for Solar Cycle #24.

Now, Socrates is not concerned about the theory. It is correlating the data from many fields. The link between economics and the energy output of the sun is beyond question. Civilization has expanded ONLY during warming periods and has contracted during global cooling. It does not care as to the reasons. It is only concerned with the correlations.

Each solar cycle has been in a declining position making lower highs than the previous. This is market terms in a bear market. The next one, Cycle #24, is going to decline sharply. That is simply cyclical analysis and pattern recognition. I am not using any particular theory, but our results can be used to confirm the validity of a theory.