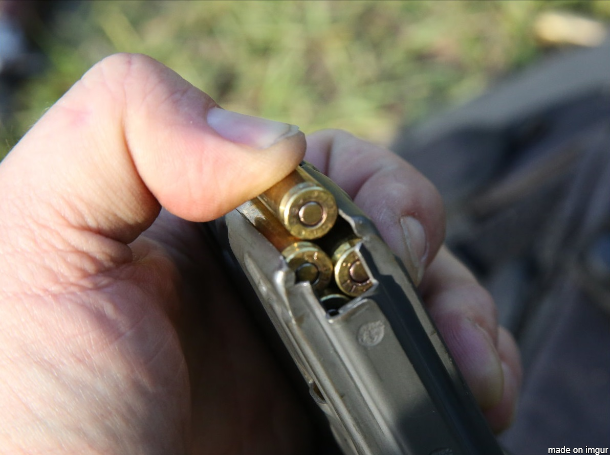 Don’t wait until the last minute to get busy. It might be too late.

This word of wisdom from Ned Ryun at American Greatness:

“So if you’re wondering how all of this stops, how we return to normal, I will tell you what a friend  told me: ‘There is no normal. There is only Clausewitz.’ There is only absolute and total political war on this axis we face until we beat them into an unconditional surrender. The Left wants it that way because they think they can win. They want no holds barred total political war. Since we can’t escape it, I say we give it to them measure for measure.”

For the Common Core grads out there, what is referred to is von Clausewitz’ classical maxim:


“War is the continuation of politics, by other means.”

We note in passing that though von Clausewitz never said so, the reverse is also true:

Politics is the continuation of war, by other means.

It doesn’t matter that they’ve been firing blanks for going on 3 years, what matters is that they keep reloading and shooting.

We’re getting to the point where that’s going to have to be answered decisively, and not just with mere ridicule, or a strongly worded rebuke. 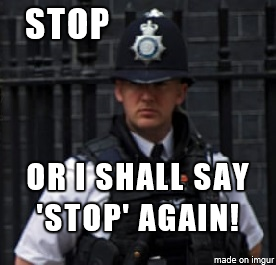 Politics is war, and they want to throw out any rules, and go for victory by any means necessary. (In their own innate twisted moral calculus.)

That always leads to real war.

The Left is continually playing in the streets. (Where, nota bene, you oughtn’t play.)

Let them. Nothing happens there of note or import, by and large.

But as has been noted times without counting at WRSA and other sites, if they don’t stop their nonsense (and they show no signs of any outbreak of common sense, and in fact are more unhinged now than three years ago, if such is possible) the day is going to come when you’re going to have to Rooftop Korean. 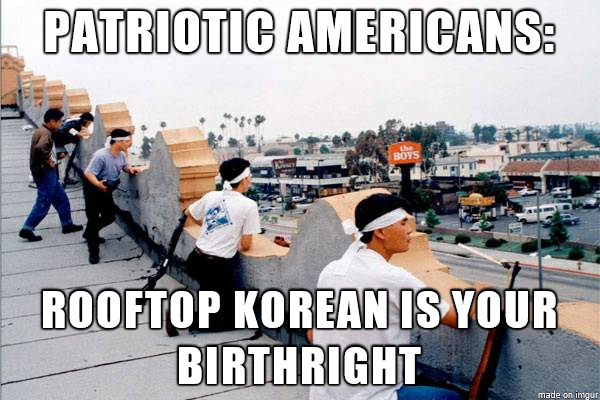 Not metaphorically.
Not rhetorically.
As Churchill wryly observed, people who won’t change their minds, and won’t change the subject, are fanatics.
They suffer from deranged lunacy. It progresses to violence, inevitably, and already has.
Every time they’ve moved to seize power, in every country, for a hundred years and more.
And if they oppose your vote in the polling booth with their votes on the street, you’re going to have to vote from the rooftops, and deal with rabid dogs in the time-honored way.

Wrap your head around that. You may be in for the long haul, or you may be One Shot Paddy, but the day is going to come.

Save Oklahoma, there isn’t a single state in the republic that was all red in 2016. There are probably no precincts that are, anywhere, from coast to coast. You’re not fighting NYFC, Hollyweird, or the DC swamp, nor will you be. They’re just logistics and air support. Jam their signal and monkeywrench their efforts, and they no longer get any vote.

The people you’re going to have to sort out, down and dirty, all live within five to twenty miles of where you’re sitting, reading this, right now. Bobby O’Rourke, and the witches on The Spew won’t be knocking on your door to take your guns, coerce your support, or haul you to the boxcars, come the day. The people who will are already in place nearby, whether you or they know it now. So you may as well face that fact.

Nobody landed at Normandy or Iwo Jima tasked with conquering everyone on the other side. They were simply told to take their 10 ft² of beachhead. And then move forward, and take another 10 ft². All the way to Berlin and Tokyo.

Your mission will be to locate, close with and destroy the enemy by maneuver, fire, and close combat. Just like everyone in every infantry back to bands of hominids fighting turf battles thousands of years before anyone thought to write it down.

They want the fight that’s coming, because they can’t out-argue it, they couldn’t out-vote it (God Bless You, James Madison et al) and they think they’re entitled to rule. Worse, they think they’re going to win, by divine right, among other reasons, even if their only deity is their bellies, and whatever hive consciousness passes for their minds.

We’ve beaten fanatics like that, in living memory, but generally, you have to get their attention first. 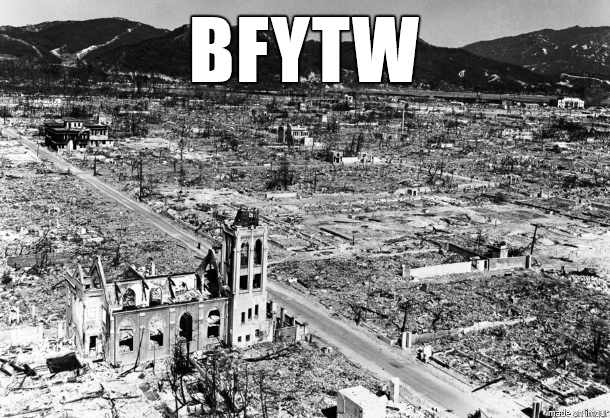 And then make them understand that the alternative to adopting a new worldview is a few face fulls of dirt. Dealer’s choice.

Nothing less seems to do the trick.

If you’re not buying a case of canned goods at the market and the sporting goods store every paycheck, you’re doing this wrong. 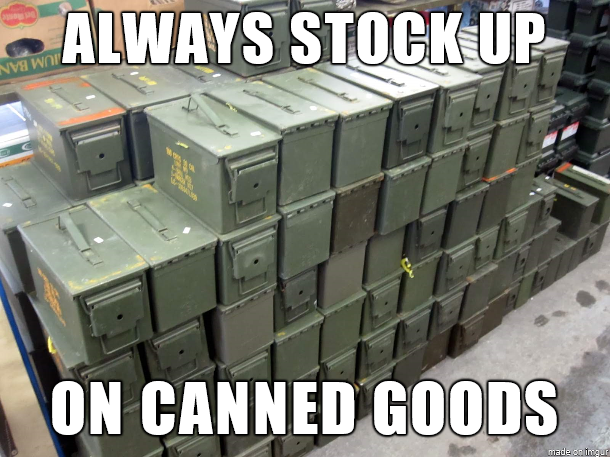 And don’t forget to spend the time to learn how to use them.
Tools without training are toys.
You don’t need hobbies, you need habits.
Get busy.