(Dean Weingarten) The Federal investigation into the no-knock raid on 1815 Harding Street in Houston Texas, on January 28th, 2019, where the married couple, Dennis Tuttle and Rhogena Nicholas were killed in their home, has resulted in indictments and arrests for three people. Those three are former officers Gerald M. Goines, 55, Seven M. Bryant, 46, and neighbor Patricia Ann Garcia, 53.

In August, the Harris County Prosecutor Charged Goines and Bryant with crimes. They were arrested and released on bond. Now, both have been charged and arrested on the federal charges, and the neighbor across the street, Patricia Ann Garcia, has been arrested on federal charges.  From justice.gov:

A federal grand jury returned the nine count indictment Nov. 14 against Gerald M. Goines, 55, and Steven M. Bryant, 46, both former Houston Police Department (HPD) officers. Also charged is Patricia Ann Garcia, 53. All are residents of Houston. The indictment was unsealed this morning as authorities took all three into custody. They are expected to make their initial appearances before U.S. Magistrate Judge Dena H. Palermo at 2 p.m. central time.

Former officer Goines is charged with two counts of depriving victims of their Constitutional rights against unreasonable searches.  According to HPD Chief Alcevdo, the charges are under Title 18 U.S.C. 242, deprivation of rights under color of authority.

Both Goines and former officer Bryant are also charged with obstructing justice by falsifying records; Goines for false statements in his offense report and tactical plan connected with the search warrant, and Bryant for false statements in a supplemental report, after the raid was conducted. There are three more obstruction charges against Goines for statements after the raid.  Goines faces sentences of 20 years to life.  Bryant faces up to 20 years on the falsification of records charge. 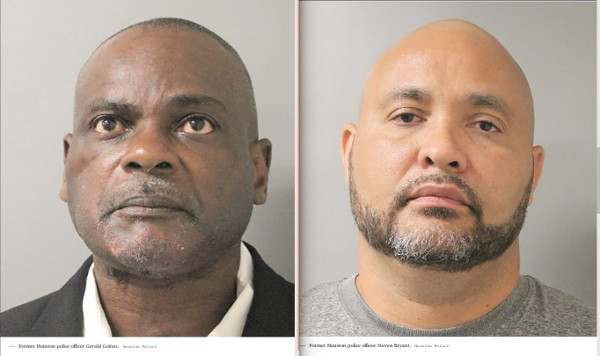 Garcia is charged with conveying false information. Cheif Alcevedo says she was the neighbor across the street from 7815 Harding Street.

The charges against Garcia allege she conveyed false information by making several fake 911 calls. Specifically, on Jan. 8, she allegedly made several calls claiming her daughter was inside the Harding Street location. According to the indictment, Garcia added that the residents of the home were addicts and drug dealers and that they had guns – including machine guns – inside the home. The charges allege none of Garcia’s claims were true.

In Cheif Acevedo’s statement, he says Garcia was charged with Title 18 U.S.C. § 1018, but I find the maximum sentence for that section is one year in prison. The press release from the DOJ, Southern District of Texas, says she faces a five year maximum sentence. The charge may be Conveying False Information with Malicious Conduct, which has a maximum sentence of five years in prison, under 18 U.S.C. § 2292.

Alcevedo mentioned all three arrestees were transported to the FBI field office in Houston.

Police Chief Alcevedo held a press conference shortly after the arrests were announced. His spin was considerably different from previous press conferences. In this press conference, he claims the investigation by HPD into Goines, Bryant, and Garcia all started mere days after the incident. But the HPD did not initiate charges or arrests of these individuals. In fact, it appeared the HPD disapproved of the charges and arrests by the Harris County prosecutor earlier this year. Now Chief Acevedo is attempting to take credit for the FBI charges and arrests.

Chief Acevedo now says “…today is another step in that journey towards justice and the journey to justice for the deceased individuals, Ms Regina and Mr. Tuttle.”

“Our number one responsibility is to the Tuttle’s, the Tuttle family, Regina and her family, and the officers who went to execute what they believed to be a lawfully obtained search warrant based on factual information provided by the case agent, .”

This is a considerable difference in attitude from Chief Acevedo’s comments a few months ago. In May, according to Reason, Acevedo was still blaming the Tuttles for the raid.

Although Police Chief Art Acevedo has said the affidavit for the search warrant was falsified, he continues to defend the investigation that led to the raid, citing a January 8 call from an unnamed woman who reported that her daughter was using drugs at the house and described Tuttle and Nicholas as armed and dangerous drug dealers. Acevedo also said neighbors had thanked police for raiding the couple’s home, which he said was locally notorious as a “drug house” and a “problem location.”

Speculation: Might this be related to the Federal indictments, the families independent investigation, and the lawsuit by the family?

In the latest press conference, Chief Avecedo admits that most (more than half) homes in Texas are likely to have guns.

“..most houses, I would say a greater number, you would find firearms than not.”

This undercuts the idea the mere presence of firearms is sufficient to justify a no-knock raid. It also emphasizes a loose end in the investigation former officer Goines. From khou.com:

Goines swore in search warrant affidavits that “knocking and announcing would be dangerous, futile,” because he claimed a confidential informant had seen a gun inside. Those claims led judges to grant no-knock warrants, which accounted for 96 percent of all the search warrants he filed in the last seven years, a KHOU 11 Investigation has found.

But in every one of the more than 100 drug cases based off those warrants, there’s no record of Goines ever seizing a gun after executing a no-knock search warrant.

HPD deserves some credit. They interviewed and taped then officer Goines in the hospital. The interview video and written replies were critical in unraveling the lies which were used to build the case for the warrant.

I suspect there are ongoing federal and Harris county investigations about what happened to the guns that were *not found* in the 100 drug cases based on Goines’ no-knock warrants. The idea that *no* guns were found is absurd.

There were numerous rumors floated over the past 10 months that it was Regina’s mother who called the police. This was predicated on the caller complaining that her “daughter” was doing drugs at 7815 Harding Street.

The caller was no relation to the Tuttles. She only lived across the street. The “daughter” in the house never existed, except as a fabrication. As there was no other woman in the house, people concluded Regina was the non-existent daughter.

It is now understood 7815 Harding Street was the targeted address for the raid. Early speculation of a mix-up with another address (7815 Hardy Street) was not correct. The police did not mix up the addresses. Chief Acevedo did not help when he mixed up “Hardy” and “Harding” in early reports.

There is an unresolved ambiguity about how the .357 revolver was not included in the initial inventory at the scene, then showed up later.

One advantage of our litigious society is pressure can be exerted in cases such as this.

The deaths innocents and wounding of officers could have been entirely prevented, if the warrant had been presented in a reasonable manner. No-knock warrants are controlled much more tightly now, according to Chief Acevedo.  No-knock warrants should be exceedingly rare in the United States.

A question for readers to consider: Houston is a heavily Democrat city. Would the federal investigation of the Harding Street no-knock raid have occurred if Hillary Clinton were President?