The US carrier outbreak aboard the USS Theodore Roosevelt is now a major military disaster, with nearly 600 confirmed Covid-19 infections among sailors reported as of Tuesday, including one death and at least four hospitalizations. 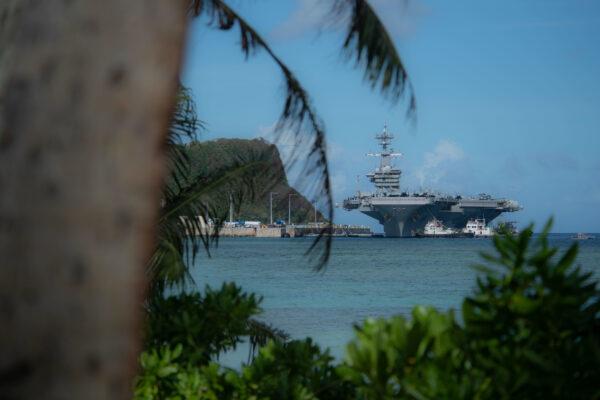 As the outbreak among the approximately 4,860 crew members grew aboard the Western Pacific deployed ship last month, it was diverted to Guam, it’s commander Capt. Brett Crozier fired after speaking out in a leaked letter. The nuclear carrier has essentially had to be evacuated of much of its crew.

Amid the continuing saga there’s been little attention paid to the reaction of America’s rivals and enemies, who have been watching closely as a multi-billion dollar nuclear carrier has been rendered ineffective by an ‘invisible enemy’.

“A Chinese naval flotilla headed into the Pacific over the weekend, evidence that the People’s Liberaty Army Navy has done a much better job controlling coronavirus than the US Navy, according to a story posted on the PLA’s English-language website.”

This followed the weekend incident in which a Chinese carrier and five warships conducted drills near Taiwan, which heightened regional tensions at a moment US regional forces appear vulnerable.

The Chinese state media report described all major carriers and ships in the Pacific region as greatly hindered in their operations by coronavirus.

“The report said that the Chinese carrier was carrying out this operation while four US Navy aircraft carriers — the USS Theodore Roosevelt, the USS Ronald Reagan, the USS Carl Vinson and the USS Nimitz — have reported cases of coronavirus, crimping their operations,” CNN continued.

While the USS Theodore Roosevelt case numbers shoot up daily, a Chinese military expert bragged to the state-run Global Times that PLA Navy has no such issues, something American military analysts have lately cast doubt on.

“Through the voyage, the Liaoning showed that the Chinese People’s Liberation Army (PLA) has done a great job in the epidemic prevention and control work and COVID-19 epidemic has not had an impact on its deployment and operations,” Xu Guangyu, a senior adviser to the China Arms Control and Disarmament Association, said in the report.

“It showed that the PLA can dispatch troops stationed anywhere at any time, with the troops always maintaining vigorous combat capabilities. The Chinese people can always count on them,” Xu is quoted as saying.

The Pentagon lately has shot back that America’s enemies shouldn’t be confused by the seeming “mixed messages” out of Washington.

“We’re still capable and we’re still ready no matter what the threat,” Joint Chiefs Chairman General Mark Milley said late last week. “I wouldn’t want any mixed messages going out there to any adversaries that they can take advantage of an opportunity, if you will, at a time of crisis,” he added. “That would be a terrible and tragic mistake if they thought that.”