The BBC’s correspondent in China has warned that the communist government may be in the midst of a second coronavirus cover up, as a massive police and medical response to a new cluster in Beijing doesn’t tally with the reported number of cases. 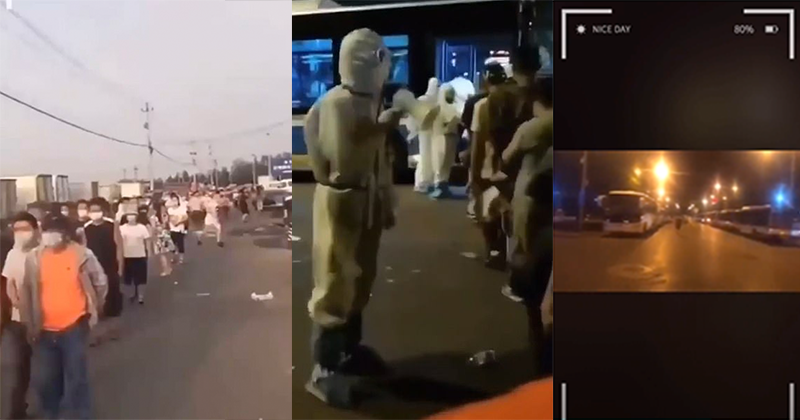 The Chinese government has locked down the capital city, instituted travel bans, and is rounding up residents, putting them on buses and placing them in quarantine:

The footage was shot by activist Jennifer Zeng, who claims that seven hotels in the city were requisitioned by the government to be used as quarantine sites.

However, Beijing only reported 27 new infections yesterday, and 106 in the past five days, prompting many to wonder, just what the hell is going on here.

More footage shows hundreds of people lining up outside Youan hospital in Beijing for virus screening:

Massive amounts of fruit and vegetables have been discarded after Beijing shut down Xinfadi wholesale market:

Earlier in the week huge amounts of police, with no regard for social distancing were deployed to the market:

The BBC’s Stephen McDonell noted that the Chinese government is either being “super cautious”, or they are again not giving accurate figures on the new infection rate.

#Beijing Govt spokesman Xu Hejian described the city's #coronavirus situation as “extremely severe”. That either means the relatively low infection tally doesn't reflect the facts on the ground or they're being super cautious, trying to mobilise the population to stop the spread

Practically speaking it’s now very difficult for anyone to leave #Beijing. The Chinese capital is going into a #coronavirus prevention bubble. 1255 flights were cancelled this morning. That’s 70% of all flights in and out of #Beijing. #China #coronavirus

So that’s from 50+ days with zero #coronavirus cases in #Beijing to 137 official* infections with symptoms in 6 days and the Chinese capital is now being effectively cut off from everywhere else. Four other provinces have reported cases emanating from #Beijing’s #XinFaDi Market.

Owners of the market that was shut down in Beijing are reportedly claiming that the ‘more infectious’ strain of the virus came from Europe via some dodgy salmon, however the Chinese Centre for Disease has said there is no evidence to support the claims.