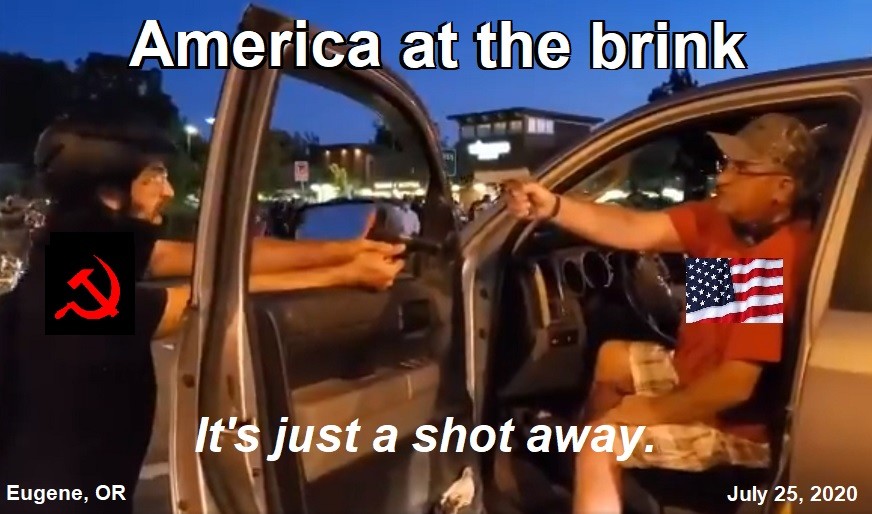 Eight were arrested Saturday night in Eugene, one for firing a gun in the crowd during the confrontation with counter-protesters and others for vandalism of property downtown early Sunday morning

A protest for the Black Lives Matter movement held in solidarity with Portland protesters Saturday night in Eugene was a night of clashing and close calls, as it almost immediately devolved into an aggressive confrontation with counter-protesters and later property destruction downtown by some.

The deliberate property destruction was reminiscent of the first night of protests following the killing of George Floyd on May 29, where several businesses on Sixth Avenue were vandalized.

But another moment is quickly becoming viral!

Antifa blocked off the streets and prevented an American patriot from using the road. When they surrounded him, he brandished a gun. One of the far-left protesters (RevCom soldiers) then brandished a gun back.

The scene was intense as you can see in the video below:

This was in Eugene, Ore. yesterday at the violent antifa gathering. They blocked off the streets and prevented a driver from using the road. When they surrounded him, he brandished a gun. One of the far-left protesters then brandished a gun back. pic.twitter.com/WY1TgdI738

More video of the driver pulling a gun on Antifa-BLM protesters:

This motherfucker pulled a GUN and threatened to kill people because he was told to stop and not hit people. If you know him please let people know his name. He is DANGEROUS. #eugeneprotests #Eugene #oregon pic.twitter.com/f7XYrn2fj1

A gun was shot into the air, causing some people to scatter. pic.twitter.com/zVii9PQ2V7

After close to a minute the truck driver drove off.