(Dean Weingarten)- At about 11:45 p.m., on 25 August, 2020, Kyle Rittenhouse was in possession of a Smith & Wesson 15 (AR15 type rifle) in Kenosha, Wisconsin, during a period of civil unrest and rioting. Several businesses had already been burned. According to his lawyers, Rittenhouse was in Kenosha working as a lifeguard. He stayed on to help remove graffiti from the high school. He found that a local business needed help to guard it from the rioters. He and a friend obtained rifles for that purpose. An armed adult male of of about 30 years old was said to be with him shortly before the attacks against him occurred.

Rittenhouse may have aroused the anger of Rosenbaum when Rittenhouse put out a dumpster fire the rioters were attempting to push against a police car.

The fire extinguisher possibility is covered at about the 3:40 mark in this youtube broadcast.

Joseph Rosenbaum was recorded as taunting armed people who were protecting businesses by shouting at them: “Shoot me n*gga! Shoot me n*gga!”

Rosenbaum, a registered sex offender, was reported by Richard McGinnis as attempting to close with Kyle Rittenhouse, but Rittenhouse made a “juke” move and started running from Rosenbaum.

Rosenbaum and other individuals started chasing Rittenhouse. Rosenbaum threw an object inside a plastic bag at Rittenhouse. A shot was fired by an unknown person as the chase moved across the parking lot.

McGinnis, a reporter who was following Rosenbaum, attempted to give first aid as Rittenhouse came back and made a phone call. The call was not to 911 as previously speculated. The call was to a friend of Rittenhouse.

As more people approached, Rittenhouse ran back across the parking lot. About a minute later, he is running northbound on Sheridan Road, pursued by a group of several people. Shouts can be heard of “Beat him up!” “Hey, he shot him!” “Get him, Get that dude!” A male runs up behind Rittenhouse and swings at him, making contact and knocking off his hat.

Rittenhouse runs another six seconds, trips, and falls down. Another person commands “Get his ass!”

At this point, several people who have been pursuing Rittenhouse effect a coordinated attack. Rittenhouse is able to raise the rifle while down on his back in the street. At least two pursuers stop and back off.

A large man in a dark jacket and light pants runs at Rittenhouse from Southwest on Sheridan Rd, attempting to perform a flying kick at Rittenhouse. Rittenhouse manages to turn and fire two shots. The first attacker lands on the pavement and then hobbles off. He has not been identified. Because of the limping retreat, it may be he was slightly wounded.

At the same time the first attacker is attempting to kick Rittenhouse, the second attacker at the scene is rapidly closing from the west side of the street. 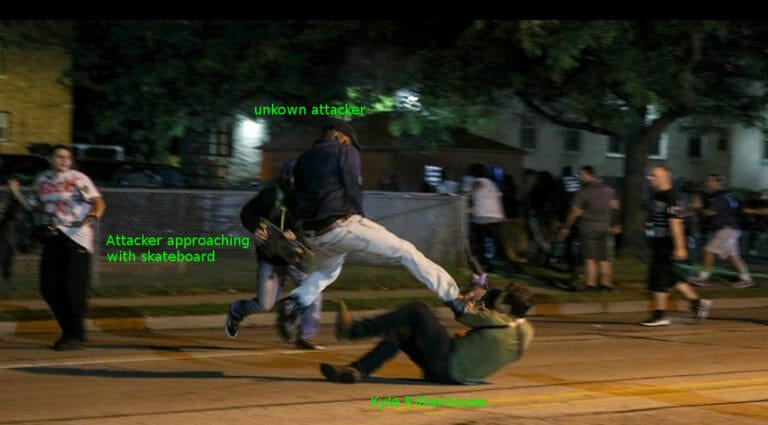 The second attacker, later identified as Anthony Huber, armed with a skateboard, has already started to run at Kyle Rittenhouse. Huber has a long history of violence and has been convicted of domestic violence. Huber strikes Rittenhouse with the skateboard less than a second after the flying kick fails.  There is a good picture of the event at greatgameindia.com.

Rittenhouse is able to fire the rifle and recover control. As Huber staggers away, fatally shot, the third attacker, Gaige Grosskreutz, puts on the brakes and stops.

Rittenhouse has his rifle pointed in the general direction of Grosskreutz.

Grosskreutz charges at Rittenhouse again, semi-automatic pistol in Grosskreutz right hand. Rittenhouse shoots Grosskreutz in the right arm, and Grosskreutz retreats. The entire coordinated attack by the five or more men is over in five seconds. Three attackers engaged in combat with direct threats. At least two others, probably more, were deterred by Rittenhouse’ control of the rifle. 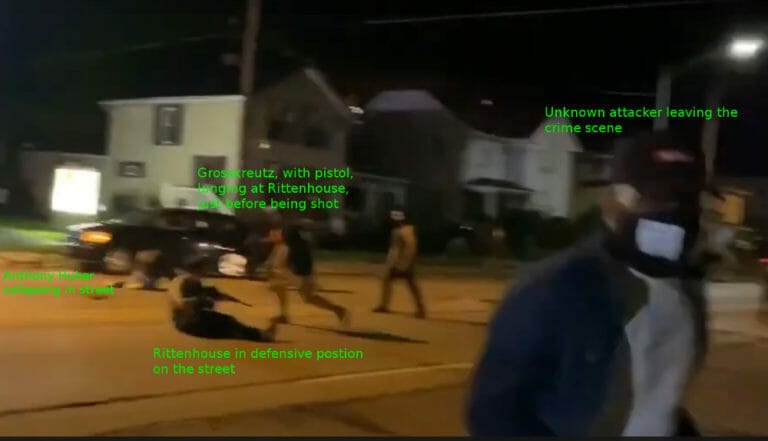 There is a very clear still of the three attackers in one frame at the milwaukeeindependent.com.

Numerous felonies appear to have been committed against Rittenhouse by the three attackers. One attacker, Anthony Huber, is dead.

What charges might be brought against the other two attackers?

As there were multiple, coordinated attacks, they could be charged with conspiracy to commit a felony, under Wisconsin statutes 939.31.

The first, unknown attacker, clearly committed battery against Kyle Rittenhouse with the flying kick attack; because it was countered, the damage may not have been great, making it a Class A misdemeanor under Wisconsin statutes 940.19.

Huber committed a battery, but Huber is dead, so he will not be charged. Because he died, however, in the commission of a crime, the other two combatants may be charged with felony murder, Wisconsin statute 940.30. All three attackers were acting in concert, so the felony murder statute is likely to apply.

Grosskreutz could be charged under the endangering safety by use of a deadly weapon, statute, 941.20, for his actions with the semi-automatic pistol. 941.20 has an exception for defense of privilege of self-defense, or defense of others, which Grosskreutz might claim, and which Rittenhouse is already claiming in his lawyers’ statement.

The Kenosha County Prosecutor has decided to press charges against Kyle Rittenhouse, and not against his attackers. This shows a reluctance, almost certainly due to political pressure, not to charge the rioters. All three attackers appear to be from Wisconsin, so there is no interstate nexus for federal charges, unless it can be shown that they received funding or direction from out of state, which would be difficult to prove.

The case shows the incredible power of prosecutors to decide who will be charged, and who will not. The voters have the ultimate authority to place or remove prosecutors. Prosecutors are almost never removed unless their crimes are blatant.

Kenosha County District Attorney Michael D. Graveley may be contacted at (262) 653-2400. Email can be sent through a email wizard at the Kenosha County website.

The Assistant DA who signed the criminal complaint against Kyle Rittenhouse is Angelina Gabriele. Her email is: angelina.gabriele@da.wi.gov

1 thought on “Why Haven’t Kyle Rittenhouse’ Attackers Been Arrested And Charged?”