The outlook for the virus pandemic is worsening across the country, with more than twenty states reporting case numbers at or near record levels. As cases rise, so do anxieties among consumers who have already started panic hoarding for the second time this year as the COVID1984 winter approaches.

As the panic hoarding begins, food makers are prepared this time, unlike the first round that started in March, which resulted in widespread shortages of food products.

“America’s food-makers are determined not to get caught flatfooted again. Many companies left sales on the table this spring when they couldn’t ramp up production fast enough for the dried pasta and canned soups that skittish consumers were stockpiling. Food producers used a calmer summer to assess the new grocery landscape and rework their strategies. Now, with Covid-19 cases climbing again and big holiday meals getting closer, investors are waiting to see whether it will be enough,” Bloomberg said.

According to Centricity Inc., a firm that tracks online search activity, panic hoarding for the second time this year is underway. They said demand for baking goods in the three weeks through Oct. 13 spiked 3,400% from a year earlier.

“That’s less than the 6,000% jump that preceded the first wave of pantry loading,” said Centricity’s chief executive officer Mike Brackett, adding that he expects this round will include other products besides canned goods and other staples.

“In the last three to four weeks, we’ve seen very drastic increases, similar to how we did with the first wave of the pandemic,” Brackett said.

The second round of panic hoarding comes as new COVID-19 daily cases have been steadily increasing since September. Even though food companies are prepared, shortages will likely be seen at US supermarkets, and or buying limitations will be placed on items. 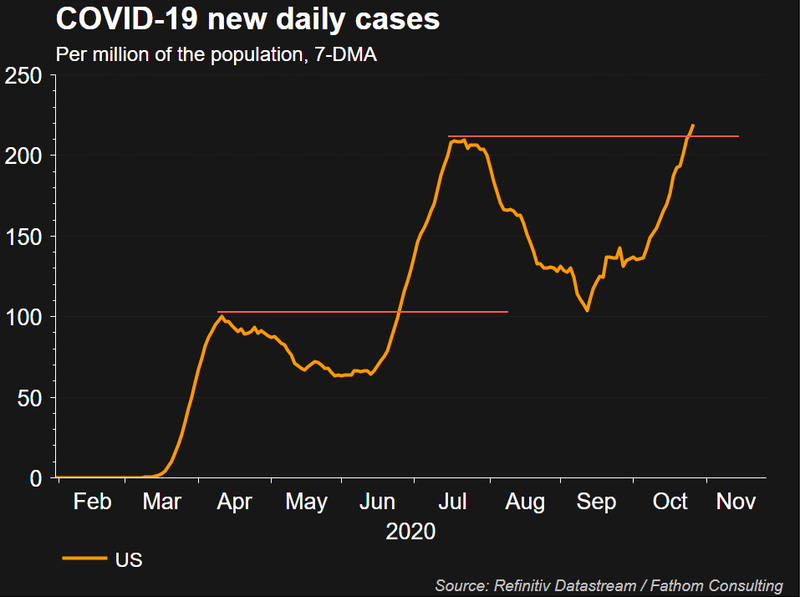 Paul Gianetto, senior vice president of sales and merchandising of Raley’s Supermarkets, told Bloomberg that only 70% to 75% of its orders are being filled, which is much better from the 40% at the heart of the pandemic. He said his department must order more private-label brands to thwart customers from wiping shelves clean.

“There is definitely a lot of hoarding that’s being anticipated that’s already causing a little strain,” Gianetto said in an interview. “The real thick of it is going to be those 10 to 14 days prior to Thanksgiving.”

Vivek Sankaran, chief executive officer of Albertsons Cos., which operates Safeway, Vons, and other grocery chains, said certain products ahead of Thanksgiving are near impossible to find.

General Mills told Bloomberg that its inventories won’t normalize until June 2021 as the virus has triggered panic hoarding and supply chain disruptions this year.

“We are pretty much selling everything we can make… As long as demand remains very elevated, and if there is an additional uptick, that will just further stretch the supply that can be produced.”

So the question readers need to be asking: How prepared are food companies for another round of panic hoarding?

A perfect storm is brewing of not just supermarkets but also food banks nationwide could experience food shortages during the COVID winter. Food insecurity could become a major issue in the months ahead.