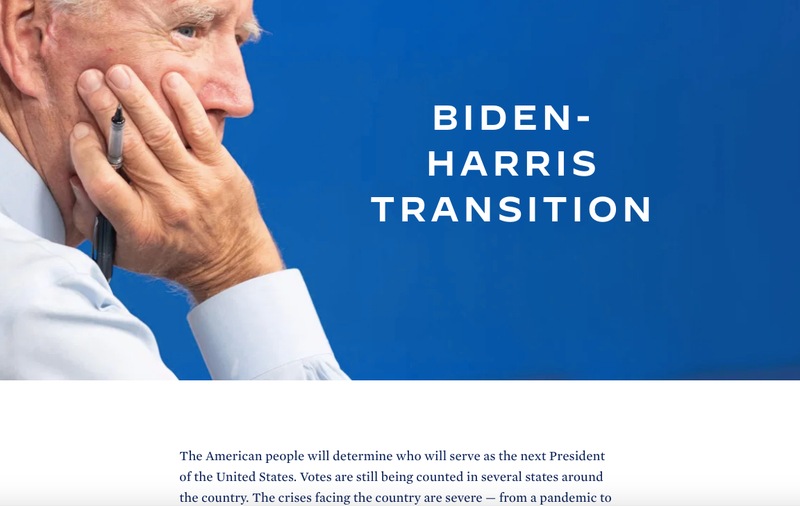 The hold-up is delaying access to classified information, among other resources.

(ABC NEWS) President-elect Joe Biden‘s transition team believes that the time has come for the General Services Administration (GSA) to “promptly ascertain Joe Biden and Kamala Harris as president-elect and vice president-elect,” adding that if the GSA refuses to do so, a variety of options are on the table, including the possibility of legal action.

“There are a number of options on the table; legal action is certainly a possibility, but there are other options as well that we’re considering,” a transition official said on a call with reporters Monday night when asked about potential legal action.

ABC News was not on the call, but the quote was confirmed by a transition official.

Traditionally, the GSA would recognize a candidate that has clearly won the election, allowing the winning ticket’s team to access a variety of resources available to aid the transition process.

But so far, GSA Administrator Emily Murphy, who was appointed by President Donald Trump in 2017, has made no such determination.

On Capitol Hill, Democrats with jurisdiction over the agency demanded an explanation from Murphy, accusing her of “undermining” the peaceful transition of power.

“We could have done this to Donald Trump four years ago, and really mucked up the works, but we didn’t. George W. Bush could have done it, but he didn’t,” Rep. Gerry Connolly, D-Virginia, a senior member of the House Oversight Committee, told ABC News. “Even in contentious elections with opposite parties, we have always respected the will of the people.”

Murphy “is running a nonpartisan agency in the executive branch, which is supposed to facilitate, after an election, the transition to the incoming administration,” he said. “That’s not a partisan thing. She has made it a partisan thing.”

The threat of legal action by the Biden team signals an intensification of their efforts to put a bow on the drawn-out election process, after Biden was projected as president-elect on Saturday by winning the state of Pennsylvania four days after Election Day.

Some of the resources made available when a winner is ascertained include access to classified information for incoming national security officials, background investigations and security clearances for potential nominees and incoming officials, and access to $6.3 million of Congressionally-appropriated funds to support transition activities, in addition to office space and equipment.

Transition officials are also not permitted to contact administration counterparts without the GSA’s go-ahead, limiting their ability to receive briefings on the inner workings of individual agencies on everything from budgets and congressional relations, to administrative support.

Biden’s team also said being ascertained by the GSA is a gateway for them to hold State Department-facilitated calls with foreign leaders, which they say is “vital” since foreign leaders have already begun reaching out to President-elect Biden.

In a statement to ABC News, the Office of the Director for National Intelligence confirmed that they had not yet made contact with Biden’s team because no decision by the GSA had been made.

“ODNI follows the statutory direction provided in the Presidential Transition Act, which requires ascertainment of the candidate by the administrator of GSA prior to supporting a potential presidential transition. ODNI would not have contact with any transition team until notified by the GSA Administrator,” an ODNI spokesperson said in a statement Monday night.

Both transition officials and outside government watchdogs have already warned that a continued delay in briefings could carry grave national security implications for the incoming administration.

Aaron Scherb, the legal director at Common Cause, told ABC News on Monday that what he called the “petty and unproductive” decision by GSA to withhold key resources to the Biden transition could have the “potential for catastrophic results.”“By GSA not signing off on this, there is certainly some classified intelligence information that the incoming administration would not have access to — and would potentially not be fully prepared on Day One to be able to counteract ongoing efforts from our adversaries like all previous incoming administrations have,” Scherb said.

“If the Biden transition team doesn’t have access to some of the documents and information, there are national security concerns,” he said.