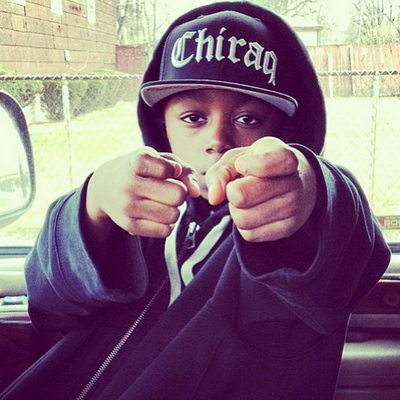 The FBI has warned Chicago-area law enforcement that nearly three-dozen street gangs “have formed a pact to ‘shoot on-site any cop that has a weapon drawn on any subject in public’,” reports ABC7.

According to an August 26 ‘situation information report’ from Chicago-based FBI officials, “members of these gang factions have been actively searching for, and filming, police officers in performance of their official duties. The purpose of which is to catch on film an officer drawing his/her weapon on any subject and the subsequent ‘shoot on-site’ of said officer, in order to garner national media attention.”

Alerts based on police intelligence, no matter how unspecific, are frequently distributed to law enforcement agencies according to investigators, especially when they involve threats to officers. The FBI’s “Potential Activity Alert” is from “a contact whose reporting is limited and whose reliability cannot be determined.” That could mean the information came from a police street source, a cooperating witness in an ongoing case, or from discussions overheard on a wiretap or other surveillance recording. –ABC7

According to CPD Superintendent David Brown, there is an overall “sense of lawlessness” felt by local police, and the ‘danger to police officers is real and increasing.’

The alleged pact comes amid national protests over several high-profile incidents between black suspects and police officers which has resulted in arson, looting, murder and other violent acts in cities across the country sparked by the death of George Floyd – a black suspect who died in police custody after an officer knelt on his neck for over eight minutes.

As ABC7 notes, the warning comes after 54 people were shot in the windy city last weekend – including two Chicago PD officers who are expected to live, while 10 victims died according to the report. That said, there is no indication that the officers were targeted as part of the alleged gang assassination pact described in the FBI alert.

The FBI alert, headlined “Pact Made by People Nation Gang Factions to ‘Shoot On-Site’ Any Police Officer with a Weapon Drawn” lists street gangs that have become well-known in Chicago the past five decades, from the Latin Kings and Vice Lords to the El Rukns and Black P Stones.

Supt. Brown said on Monday the spike in attacks on police makes it clear to him that “people are seeking to do harm to cops.”

“We need police officers and as community members we need to push back fervently against lawlessness,” Brown said. –ABC7

Chicago PD told the outlet that they are aware of the gang threat, and take all threats to officers’ safety seriously. Federal authorities have not provided additional information.

Illinois voters are voting with their feet. Not only are people scrambling to get out of Cook County, but the entire state is suffering.

Cook County has Largest Population Loss of Any County in U.S.

Cook County lost more population than any other county in the United States from July 2015 to July 2016, according to a new data release from the U.S. Census Bureau.

Cook County shrank by 21,324 people. The county had more births than deaths and gained 18,434 people from international immigration. However, Cook County had a net loss of 66,244 people to other parts of the United States, which more than offset the components of population growth. 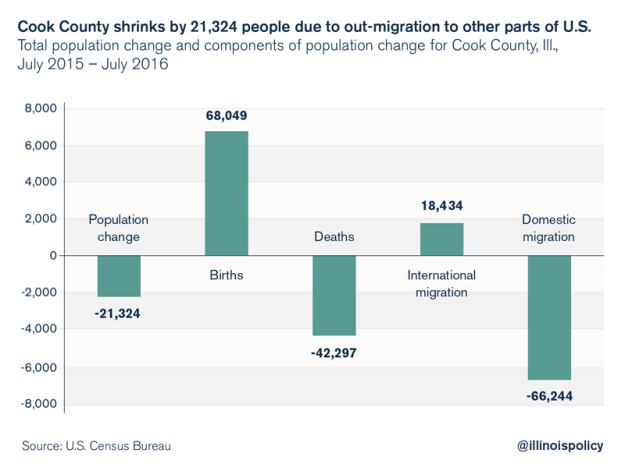 However, the people leaving Cook County aren’t showing up in other parts of Illinois when the net movements of people are considered.

Cook, DuPage, Lake, Kane, McHenry, Will counties see net out-migration to other parts of the U.S.

The major driver of Cook County’s shrinking population is that the county’s domestic migration losses have doubled over the last five years, while international gains have remained flat and gains from more births than deaths have declined.

The flow of people out of Cook County did not result in net in-migration for the collar counties. Cook County’s net out-migration of 66,244 people was followed by net out-migration of 9,171 people from DuPage; 5,179 from Lake; 1,824 from Kane; 1,589 from McHenry; and 1,253 from Will. Kendall County is the nearest to Cook to have net inflows, with Kendall gaining 553 more people than it lost to other parts of the country.

The out-migration from Cook, DuPage, Lake and McHenry counties was large enough to make all those counties shrink in total population. Kane County and Will County managed to have population gains despite their out-migration problems.

It should worry policymakers in Chicago and Cook County that out-migration and population loss were already so strong in the July 2015 – July 2016 timeframe. That’s because Chicago and Cook County’s major property and sales tax hikes had not yet taken effect at the time of this out-migration. When those tax hikes are in place, the Chicago area will likely lose more population due to taxation. And the economic effects of increased taxation will be felt a few years later, with fewer jobs and economic growth than would have occurred without the tax hikes. Population loss in the Chicago area is likely to get worse.

Not just the collar counties: All of Illinois is seeing population losses 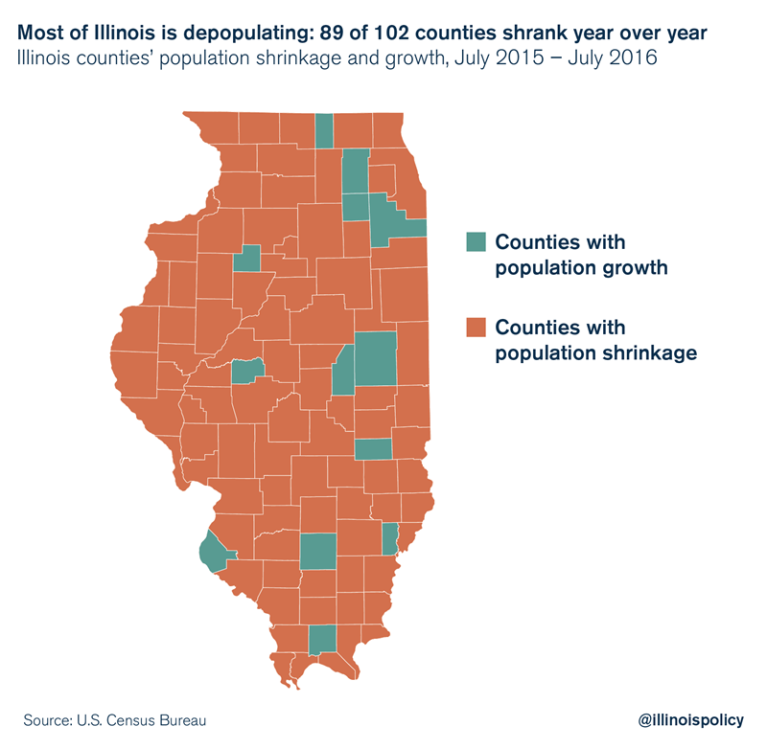 Most of Illinois’ metropolitan statistical areas are also shrinking due to large migration losses to other parts of the country, with only Elgin and Champaign showing slow population growth. The Chicago metro division saw a net migration loss of nearly 78,000 people, driving a population decline of more than 19,000 people for the Chicago metro division.

The U.S. Census Bureau’s report does not come as a surprise, but it should serve as a warning to state and local governments. Illinois is depopulating, and no area is immune from its effects. Downstate communities are especially stressed due to the loss of manufacturing jobs and other blue-collar industries. And the Chicago area is likely to face additional stress as nearly $2 billion dollars in tax hikes are phased in over the next few years.

Lawmakers can take on two key measures to give taxpayers hope. The first is to freeze property taxes statewide so Illinoisans can feel secure in their homes. The second is to pass a balanced budget without any tax increases to give residents confidence that lawmakers can rein in out-of-control spending and not repeatedly hit up taxpayers for more of their hard-earned dollars.

Before considering any more tax increases, policymakers statewide should consider the sobering reality of how quickly people are leaving the state.

People keep asking “When are you leaving?” Rest assured plans are in progress and have been for some time.

But some people are stuck here. Others want to be here for personal reasons even though they are fed up with the state of affairs.

I am an unpaid senior fellow at the IPI and receive no part of donations. My benefit is the same as yours. The IPI is fighting on our behalf.

The Illinois Policy Institute is a 501(c)(3) charitable organization, and contributions are tax-deductible to the fullest extent allowed by law.

Few organizations work as hard as the IPI to support Illinois taxpayers.

“If you read some of the left-leaning writings of people like Saul Alinsky, you understand exactly what they’re doing. This is part of the plan,” Carson said.

Alinsky’s infamous “Rules for Radicals” does not explicitly encourage violence. However, according Alinsky protégé Nicholas von Hoffman, in private “he would say that violence has its uses.”

Clinton was a follower of Saul Alinsky and met the Chicago community organizer several times in 1968 while writing a Wellesley college thesis (“An Analysis of the Alinsky Model”).

“Clinton’s relationship with Alinsky, and her support for his philosophy, continued for several years after she entered Yale law school in 1969,” writes Alana Goodman for The Washington Free Beacon.

Alinsky was fond of the young law student Clinton. “Since I know [Alinsky’s] feelings about you I took the liberty of opening your letter because I didn’t want something urgent to wait for two weeks,” replied Georgia Harper, Alinsky’s secretary, in response to a letter (see below) Clinton sent inquiring about his book, “Rules for Radicals.”

Shortly after Bill Clinton was elected the White House instructed Wellesley to bury Hillary’s thesis. “After the call from the White House, Wellesley’s president, Nannerl Overholser Keohane, consulted with lawyers and closed access to any thesis written by a U.S. president or first lady, a rule affecting only Hillary D. Rodham’s thesis,” writes Bill Dedman for NBC News.

On Saturday political insider Roger Stone told Alex Jones the disruption and violence at the Trump rally was a false flag staged by Hillary Clinton to discredit rival Bernie Sanders.

“The entire conflagration in Chicago is a Hillary Clinton operation,” Stone said during a phone interview. “Frankly, I can’t see Bernie Sanders having anything to with it… this is not his handiwork.”

By Kurt Nimmo for Prison Planet