As the country’s economic problems mount, towns and cities have been hit by an outbreak of looting and violence. 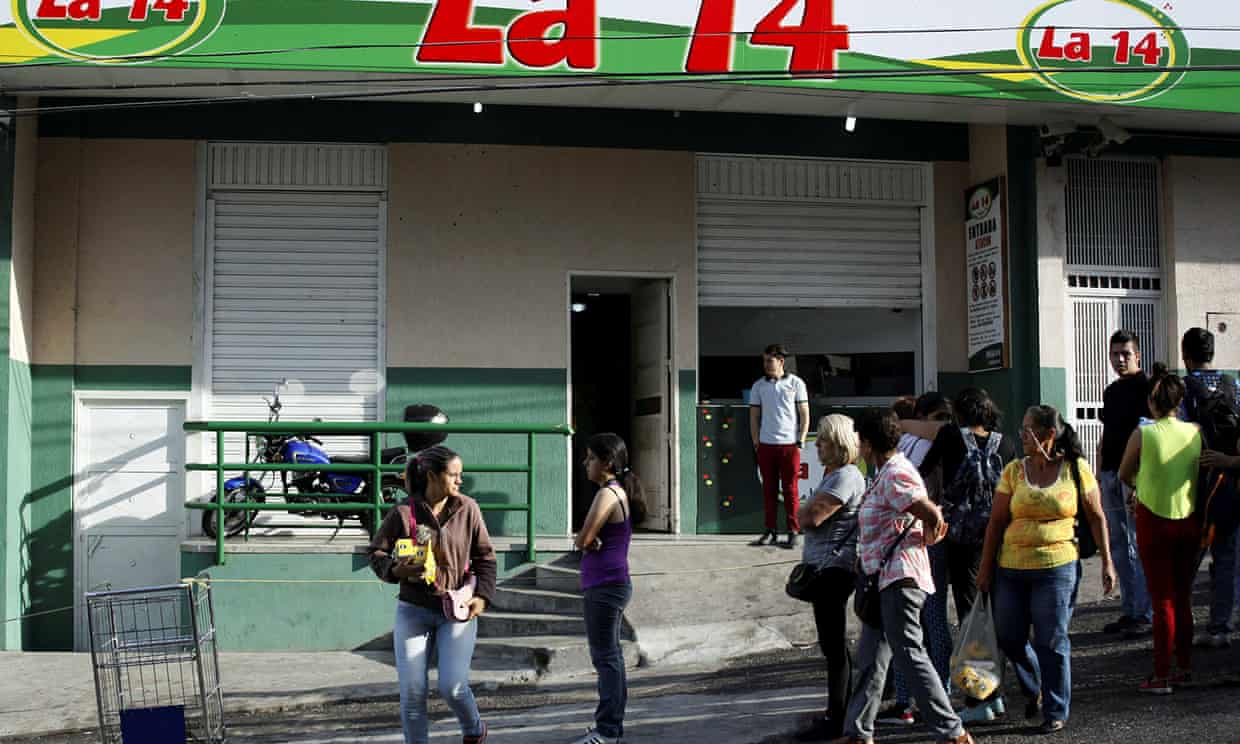 On the night of 9 January, for example, a hungry mob took just 30 minutes to pick clean a grocery store in the eastern city of Puerto Ordaz. By the time owner Luis Felipe Anatael arrived at the bodega he’d opened five months earlier, the looters had hauled away everything from cold cuts to ketchup to the cash registers.

“It makes you want to cry,” said Anatael in a telephone interview. “I think we are headed for chaos.”

Evidence for his prediction can be found in towns and cities across Venezuela that have been hit by an outbreak of looting and mob violence. Angry about empty supermarket shelves and soaring prices, some people are breaking into warehouses, ransacking food trucks and invading outlying farms.

During the first 11 days of January the Venezuelan Observatory for Social Conflict, a Caracas rights group, recorded 107 episodes of looting and several deaths in 19 of Venezuela’s 23 states.

But the figures don’t fully capture the level of desperation. Recent headlines from Venezuela read like notes from the apocalypse:

‘On Margarita Island dozens of people waded into the ocean and forced their way aboard a fishing boat, making off with its catch of sardines’

‘In the city of Maracay, just west of Caracas, thieves broke into a veterinary school, stole two pregnant thoroughbred horses and slaughtered them for meat’

‘A recent video from the western state of Mérida shows a group of people cornering a cow before stoning it to death as bystanders yell: “The people are hungry!’

There have been previous incidents of looting but analysts fear that the current wave could linger amid the Venezuela’s economic freefall.

President Nicolás Maduro blames the country’s woes on an “economic war” against his government by right wingers and foreign interests.

But his critics say his government has disrupted domestic food production by expropriating farms and factories. Meanwhile, price controls designed to make food more widely available to poorer people have had the opposite effect: many prices have been set below the cost of production, forcing food producers out of business.

Meanwhile the government has less cash to import food because of its mismanagement of the oil sector, where production has fallen to a 29-year low. Hyperinflation and the collapse of the currency have put the prices of foodstuffs available on the black market beyond the reach of many families.

But rather than reforming the economy, the government has resorted to handouts and far-fetched schemes.

A newly formed ministry of urban farming encourages people to grow tomatoes and raise chickens on their patios and rooftops. Another campaign encourages Venezuelans to breed rabbits for the table. At a recent news conference, Freddy Bernal, the urban farm minister, declared: “We need people to understand that a rabbit is not a pet. It’s two and a half kilos of meat.”

But as they grow thinner some Venezuelans insist they have a right to take matters into their own hands. That was the case in the western city of Maracaibo, where residents recently swarmed into the streets, stopped two trucks filled with flour and candy, and emptied them.

“We either loot or we die of hunger,” one of the looters, Maryoli Corniele, told Diario la Verdad, the local newspaper.

This is precisely the Venezuela its socialist leaders vowed to prevent.

Sometimes the looting has been spontaneous. But in other cases the targeting of shops and food trucks appears to have been coordinated via chat groups on Facebook and Whatsapp. Security forces have largely stood by.

Although his bodega is located just down the street from a national guard post, Anatael said that his pleas for help were ignored. He scoffed at officers’ claims that they lacked enough troops to protect businesses.

“Whenever there are anti-government protests, they have more than enough teargas, tanks and troops to put them down,” he said. “But for us business people, there is no security.”

By John Otis | The Guardian

Venezuelans have been experiencing high inflation, mass shortages of food and other goods at the hands of government for years, with no end in sight.

A Venezuelan soldier who shot dead a pregnant woman on Christmas Eve has been arrested.

Alexandra Conopoi, 18, was killed as she waited for subsidized pork that the government had promised to millions for a traditional Christmas dinner.

It happened as protests broke out when people realized there would not be enough meat for everyone in line.

President Nicolás Maduro accused foreign countries of blocking food exports in order to create discontent, despite the fact the Venezuela Government is chronically behind on paying for imported food.

The soldier has been identified as David José Rebolledo Cortez.

After enduring shortages of food and medicine for years, as well as a total collapse of their currency, the people of Venezuela have had enough. Last week it was estimated that 2.5 million people marched against the Maduro regime, which had previously tried to strip away the powers of the opposition-led parliament. It’s estimated that as many as 6 million people may have taken to the streets to protest throughout the country.

In the lead-up to the protest, which had been planned for weeks by opposition political parties, President Maduro issued an alarming proclamation that didn’t receive nearly enough press. He promised to expand the nation’s armed militia, and hand out firearms to as many as 400,000 loyalists.

The Bolivarian militias, currently at approximately 100,000, were created by the late Hugo Chavez to assist the armed forces in the defense of his revolution from external and domestic attacks.

Speaking to thousands of militia members dressed in beige uniforms gathered in front of the presidential palace, Maduro said that vision remains relevant as Venezuela continues to face “imperialist aggression.”

“A gun for every militiaman!” he cried.

If you know your history of communist regimes, you understand what comes next. Maduro’s response to millions of hungry pissed off people, is to arm his die-hard supporters, who will be able to purge the starving masses that dared to cross him. They may not face much resistance, because in 2012 Venezuela banned private firearm ownership.

Venezuela has brought a new gun law into effect which bans the commercial sale of firearms and ammunition.

Until now, anyone with a gun permit could buy arms from a private company.

Under the new law, only the army, police and certain groups like security companies will be able to buy arms from the state-owned weapons manufacturer and importer.

Venezuela saw more than 18,000 murders last year and the capital, Caracas, is thought to be one of the most dangerous cities in Latin America.

Do you see how that works? Maduro’s socialist policies turned that country into a crime-ridden hell hole, (and eventually turned their capital city into the most violent in the world). Instead of abandoning their centrally planned economy, which would bring prosperity to all and lower the crime rate, Maduro took away everyone’s guns. Now that his socialist policies are bringing Venezuela’s population to brink of starvation and revolution, he decides to arm his violent and dimwitted loyalists. He has set up the perfect conditions for a genocidal purge of everyone who opposes him.

I’d say that this would be a fine lesson for any would-be socialists in this country, but they don’t seem eager to learn. Neither did many Venezuelans, who elected these control freaks nearly two decades ago. They could have looked at any socialist experiment from the 20th century, and realized that it always leads to starvation and mass murder. Instead they let themselves be conned by what is now the oldest and most deadly political trick in the book.