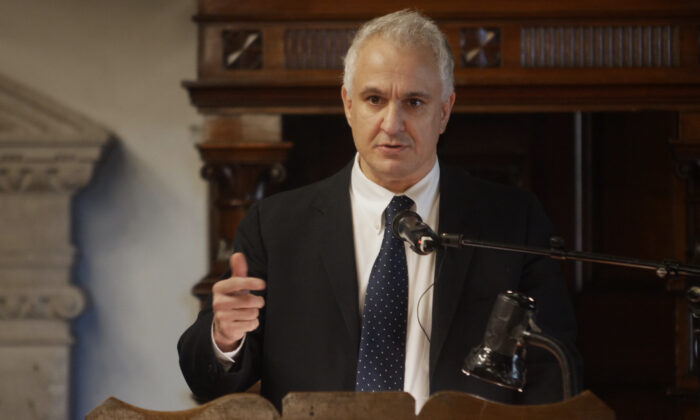 Peter Boghossian, assistant professor at Portland State University and co-author of “How to Have Impossible Conversations.” (New Discourses)

(Jack Phillips) Portland State University professor Peter Boghossian said he’s resigned from his position in an open letter and accused the college administration of creating an environment that imperils dissent.

“I never once believed—nor do I now—that the purpose of instruction was to lead my students to a particular conclusion,” Boghossian, a philosophy professor, wrote in the letter. “Rather, I sought to create the conditions for rigorous thought; to help them gain the tools to hunt and furrow for their own conclusions. This is why I became a teacher and why I love teaching.”

But over time, he argued, Portland State University—a publicly-funded college—made “intellectual exploration impossible” and has transformed itself into a “social justice factory” with a primary focus on race, victimhood, and gender.

“Students at Portland State are not being taught to think. Rather, they are being trained to mimic the moral certainty of ideologues,” said the letter, which was published on Bari Weiss’s Substack page. Weiss herself previously worked for the New York Times until 2020 when she resigned, accusing her Times colleagues of bullying, and argued that the paper capitulated to Twitter-based pressure campaigns.

“Faculty and administrators have abdicated the university’s truth-seeking mission and instead drive intolerance of divergent beliefs and opinions,” Boghossian added. “This has created a culture of offense where students are now afraid to speak openly and honestly.”

Portland State University has not immediately responded to The Epoch Times’ request for comment.

Later in his letter, Boghossian said that over time, he faced retaliation for speaking out against academia’s narratives around race, gender, and social justice.

“For me, the years that followed were marked by continued harassment. I’d find flyers around campus of me with a Pinocchio nose. I was spit on and threatened by passersby while walking to class. I was informed by students that my colleagues were telling them to avoid my classes,” he wrote.

The lecturer added: “And, of course, I was subjected to more investigation. I wish I could say that what I am describing hasn’t taken a personal toll. But it has taken exactly the toll it was intended to: an increasingly intolerable working life and without the protection of tenure.”

Years ago, Boghossian drew headlines when he and two other authors submitted bogus race, gender, sexuality, and cultural studies to academic journals to see whether they would pass through peer review and be accepted for publication.

Many of these papers were subsequently published, which Boghossian and the others suggested was due to lackadaisical criteria and institutional rot in several academic fields.