De Blasio’s New York has finally hit an all-time low: the once bustling city is now on the verge of looking like a demilitarized zone. Between the pandemic and the riots in the city, iconic 5th Avenue now looks more like a dystopian nightmare in a recently shot video posted to Twitter.

The video follows a car driving down a deserted 5th Avenue, with almost all of the area’s high end stores boarded up and shut down. There are few people seen on what is usually a busy street.

“Look at everything. Everything’s boarded up. Even the hotel. Boarded up,” the video’s narrator, who is obviously fed up with how the city looks, says. 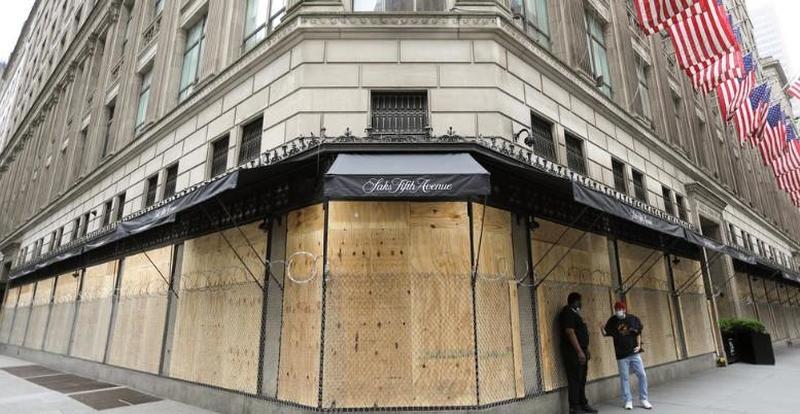 He continues: “This is all Manhattan, boarded up. Have you ever seen Manhattan look like this? The media will not report this.”

“Everything boarded up. They don’t want to show this to you people because they’re afraid. Saks 5th Avenue – boarded up from end to end. They put up barbed wire. Everywhere you see boards, windows are gone. Look at New York City – what happened,” he says.

The video runs over 2 minutes and shows dozens of boarded up businesses. You can watch it here:

Don't know who recorded it but I downloaded this yesterday

"Beirut DeBlasio" without the explosion pic.twitter.com/5I48ZGcWTZ

The video was originally posted as a response to another Tweet that seems to tell the developing tale about DeBlasio’s New York:

From an email chain I'm on this morning:

"DeBlasio has made the city worse than Dinkins days. I’m selling my place. Already have interest, I’m out!"

Now multiply this by the whole city. NYC is toast

In an interview with New York Magazine, NYC Mayor Bill De Blasio revealed his distaste for one of America’s oldest institutions of freedom… private property.

What’s been hardest is the way our legal system is structured to favor private property. I think people all over this city, of every background, would like to have the city government be able to determine which building goes where, how high it will be, who gets to live in it, what the rent will be. I think there’s a socialistic impulse, which I hear every day, in every kind of community, that they would like things to be planned in accordance to their needs. And I would, too. Unfortunately, what stands in the way of that is hundreds of years of history that have elevated property rights and wealth to the point that that’s the reality that calls the tune on a lot of development.

The Daily Wire accurately compared the quote to the teachings of Karl Marx, specifically an excerpt from the 1875 essay, “Critique of the Gotha Program,” which can be seen below.

In a higher phase of communist society, after the enslaving subordination of the individual to the division of labor, and therewith also the antithesis between mental and physical labor, has vanished; after labor has become not only a means of life but life’s prime want; after the productive forces have also increased with the all-around development of the individual, and all the springs of co-operative wealth flow more abundantly—only then can the narrow horizon of bourgeois right be crossed in its entirety and society inscribe on its banners: From each according to his ability, to each according to his needs!

This is not the first time De Blasio has showed sympathy for Communist ideology.

In May of this year, De Blasio was blasted for marching in a NYC parade with Communist Puerto Rican terrorist Oscar López Rivera, and then months later marching alongside Antifa in an anti-Trump protest.

The State of New York keeps a database of individuals that it considers too mentally ill to own a gun. Recently released figures indicate that the list has grown to a massive size and includes many people who pose no threat to the public.

Figures published last month indicate that the registry includes 34,500 people. Mental health doctors say that this figure far exceeds the number of people who actually have dangerous mental illnesses in the state.

“That seems extraordinarily high to me,” said Sam Tsemberis, the former director of New York City’s involuntary hospitalization program for homeless and dangerous people. “Assumed dangerousness is a far cry from actual dangerousness.”

The state of New York requires doctors, psychologists and social workers to notify county officials about patients who they believe should be prohibited from owning firearms. The decision for who qualifies for gun confiscation appears to be completely up to the doctor.

There have already been at least two cases where guns were confiscated from law-abiding citizens.

In 2013, a college librarian in Amherst, NY was forced to surrender his weapons despite no criminal record or indications of mental instability. Why? Because he had briefly been prescribed anti-anxiety medication.

Another individual, who remains anonymous, also had his pistol permit revoked after the state found out that he was seeing a therapist for anxiety. He had no criminal record or history of violence.

Now it appears that thousands of other peaceful citizens could face similar consequences.