I recently wrote an article in which I detailed the anticipated nine-pronged attack upon the United States by the combined forces of Russia, China and the United Nations.

One of the elements of this attack consisted of the build up of 5th column forces designed to significantly weaken America prior to the actual invasion. This plot is currently in motion as we are seeing the manifestation of this portion of this nine-pronged attack upon America through the activation of 5th column forces designed to seriously weaken America and destroy citizen moral. The following was previously reported on the CSS:

A fifth column attack is already underway in America. It is largely compromised of Antifa and BLM. However, Sinaloas are crossing the border in force and are headed to pre-stored weapons caches and are apparently awaiting orders, along with ISIS and MS-13. These groups along with the level of their attacks, pales as what is coming to America. What is coming is an all out 5th column attack and it will be carried out by terrorists who have already gained entrance into the United States. Key assassinations and critical infrastructure sabotage will be carried out by these forces. The first casualty will be the grid. Random acts of violence will be perpetrated upon the American people including the slaughter of innocent Americans, the attack upon schools and malls will be common. I have often referred to this as the coming TET Offensive in which all the embedded terrorists will simultaneously attack America in dozens of locations. Many American communities will witness their communities rounded up and executed. That’s what communists do.

From multiple sources, I have learned that the Sinaloas are crossing the border in force. They have been trained in paramilitary and light infantry tactics by the CHICOMS in Mexico. The cartel forces are headed to predetermined sights where weapons caches are being stored. These well-trained cartel members will soon be targeting, as I have just stated, local and federal law enforcement. Is this why the Portland terrorist response team quit their positions in fear of their lives as reported in the mainstream media? I can’t speak with certainty as to the collective reasons associated with the actions of Portland police officers, but it begs the question, what do they know that the rest of us do not?

The readers should recall that there were three weapons caches, established by the CHICOMS, in which Antifa participated in, were discovered last year in 2020. We also know that at one time, there were areas in Portland in which Antifa received specialized military training with regard to the specific weapons in these caches. It is logical to assume that the reason that there is such a small presence of Antifa in Portland is because they are busy training their Sinaloa allies in the use of these weapons in other locations. It is also instructive to point out that between the various terrorist groups and America’s insane border practices, there are an estimated 1.2 million terrorists (eg Hamas, ISIS, MS-13) currently within the United States. For the past several years, myself and others have called on the government to root these terrorists out and our warnings have collectively been ignored.

Please allow me to state for the record, FEMA, DHS and the Border Patrol are all aware of this threat. Along with this general knowledge on the part of federal law enforcement, we have to add in the Texas Rangers as well. During the last major illegal immigration invasion, I was contacted by a high-ranking Texas Ranger and told me the following:

…The main reason that I am writing to you is to encourage you to keep writing on the growing threat of infiltration in Texas and I suspect other states as well. The infiltration I am writing about is not just Special Forces that are going to conducting covert drills in our state. that is concerning and I agree with you this involves martial law.  For now, I am talking about ISIS and the danger that they pose to all of us. Our intelligence indicates that they have enough manpower & firepower to subdue a small town. The Midland Walmart takeover by DHS is a national security move in which we have been told falls under the Continuity of Government provisions. The Threat Fusion Centers are providing related information on what it is we are facing but the information sharing is only in one direction and that is very concerning. We expecting an attack on more than one Texas city or town by ISIS and/or any of their partners….

The plot for terrorists to attack American cities and law enforcement is a long-standing plot. According to Judicial Watch sources (2015), that included BOTH a Mexican Army field grade officer and a Mexican Federal Police Inspector, an ISIS camp exists just a few miles south of the American/Mexican border. During the course of a previous joint operation, Mexican Army and federal law enforcement officials discovered documents, detailing terrorist sites, both in Arabic and Urdu, and these plans includes attacking Fort Bliss. The implications are obvious. The Judicial Watch document, which revealed the existence of an ISIS camp 8 miles from El Paso was based upon a made-up story based upon “revenge” being circulated by a disgruntled employee of the DoD. On its face, this is one the silliest disinformation pieces I have ever seen. Because the Judicial Watch revelation is double sourced which means that a single disgruntled employee did not start this rumor. The ISIS camp is real. And yet, this is what some of the people in Texas who are investigating this even have come to believe. It is an undeniable fact that an ISIS camp exists 8 miles from El Paso. The documents released by Judicial Watch are clear as to the terrorist intent of ISIS operating within the area. Yet, the DOJ never moved on the facility, nor was any other federal agency allowed to act.

One can only conclude that a planned 5th column attack upon America by terrorists, working with the CHICOMS is close at hand. What will that attack look like? 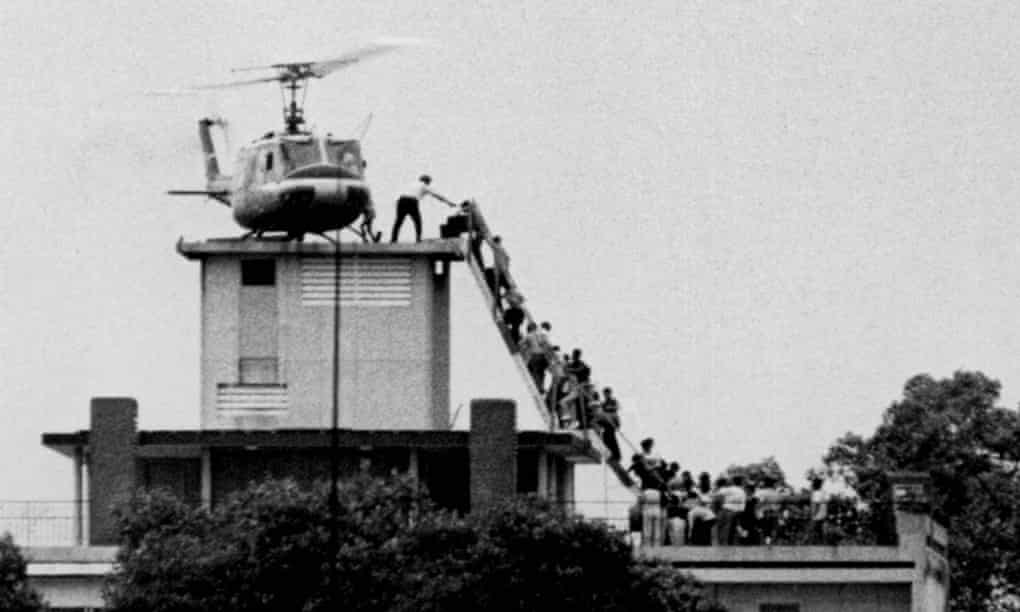 Evacuees are helped aboard an Air America helicopter perched on top of a building in Saigon. Photograph: Hugh van Es/REUTERS

Readers may recall that in 1968, after the LBJ administration was repeatedly telling the American people that we were winning the Vietnam War, and the LBJ disinformation story worked, until the Viet Cong attacked every single capital, in every single South Vietnamese province. Even the US embassy in Saigon was momentarily captured. This was the turning point of the Vietnam War. My sources have compared what’s coming to the TET offensive. I HAVE BEEN WARNING ABOUT THIS COMING EVENT FOR YEARS!

According to these deep-cover sources, as well as on-the-record sources, gun-free zones will be targeted (e.g. athletic events, concerts, schools, malls and university campuses). The Vegas Massacre was merely a beta test for what is coming. DHS knows it and the FBI knows it, and now you know it. WHY DO YOU THINK, THE FBI HEADQUARTERS IS BOARDED UP AND THE WHITE HOUSE AND THE CONGRESSIONAL GROUNDS HAVE PROTECTIVE FENCING AND TROOPS?

Of course, attacks upon the government is expected. This will lead to the imposition of martial law practices without a formal declaration of martial law. This is the ultimate false flag! The post-attack policies will include gun confiscation, the execution of gun owners who do not surrender their guns following an executive decree. I do not anticipate that Biden will be the one giving that order. He will be long gone because he cannot lead. The policies also call for the enforcement of sanctions against people who are on various lists. No, not the No-Fly lists, but for people who are on the Red and the Blue Lists. These are the very same lists that Steve Quayle has been warning us about for years.

Seven years of warnings is ready to come to fruition. Soon, our nation’s cities will be on fire and no politician and law enforcement personnel will be safe!

How The PLA Can Launch Colonization Of America From Texas

1 thought on “Dave Hodges: Strong Indications That 5th Column Forces Have Gone Active As a Prelude to Invasion”

Whiskey Tango Texas is a non-monetized, apolitical hobby blog featuring re-posted material from the public domain for informational purposes only. Content and opinions discovered on this blog should not be relied upon without independent verification. No claims are made on the properties of others. Fair use is relied upon. All rights reserved. ─ No one is coming to save us. Everything is your responsibility. Salvation is on the other side of fear. LET’S Win!