If there ever was a time when you could see a trend solidly in motion, now is it. 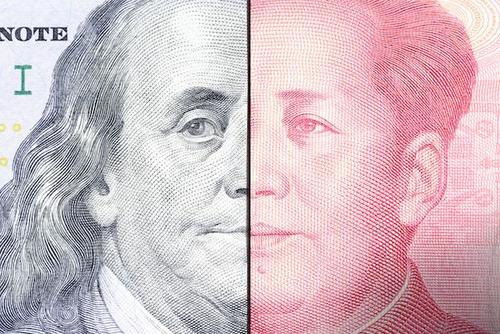 (Chris Macintosh) That the Western, previously civilized world is in decline has been known to anyone with an ounce of curiosity and little analysis of data points.

Before Xi’s ascension to power one could have argued that this trend was worrying, but not terrifying.

What makes it terrifying is that Xi managed to abolish the two-term limit for his presidency with an overwhelming majority (2,959 to 2 and 3 abstaining votes – no prizes for guessing where those 5 guys are now).

He then proceeded to have his name enshrined in the constitution. Seriously.

You may recall Xi’s “anti-corruption” purge from a few years back.

Well, this was Xi’s own internal secret police, designed to kill (literally) any opposition from within the CCP (Chinese Communist Party).

Today’s China, or should I say CCP, is not the same CCP of Deng Xiaoping. Today’s CCP is an ideological global weapon of control, and it is spreading like a cancer.

Which brings me to…

To Tech, or Not to Tech?

Sometimes knowing where not to be is just as important as knowing where to be since all investments are a matter of opportunity costs and probabilities.

The implosion of Chinese tech continues. 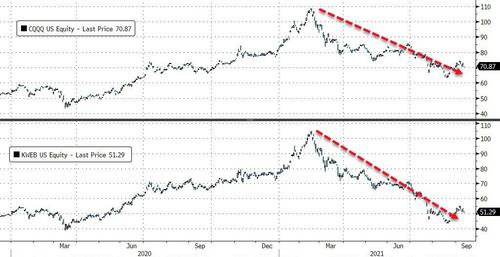 One can argue as to what the particular catalyst for this selloff was. Certainly, the CCP going after Didi (China’s clone of Uber) hasn’t helped things, though this is peculiar to me. Because, when Jack Ma fell afoul of the CCP and disappeared (still yet to be seen) with Ant financial now a wholly owned subsidiary of the CCP, it was clear that Xi was implementing his three Cs: control, consolidate, continue.

It really is just nationalisation of resources with a carefully constructed veneer to pretend it really isn’t that at all. But that’s all it is — a veneer.

Truth is, much of the world works like this, including Putin’s Russia. China is moving towards controlling the key industry sectors (not that they didn’t have significant control before because they did) with less pretentiousness than before. Why?

The same reason they took Hong Kong. Because they could. And they could because the rest of the world is distracted, ironically by the Covid pantomime created by Fauci, Gates, Klaus, and their fellow technocrats.

All of this allows the CCP to do things they had not previously been able to do without repercussions, both politically and economically.

So now we have this gap between QQQ (US tech) and CQQQ (China tech), and the ratio between the two tech ETFs closed at another all-time low. 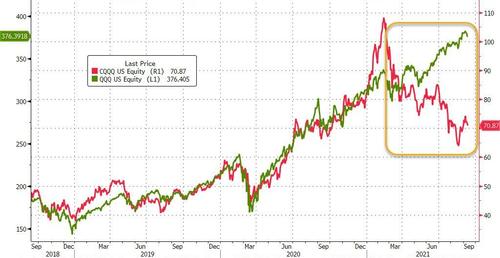 The Chinese tech regulatory issue has been going on for months, but the big question here is what is priced in.

What about the longer-term view? Is US tech any better?

US investors have been buying up China tech as if it’s the same as US tech. Clearly it isn’t.

But the other question that is worth thinking about is what the US tech investors don’t know about the US tech? Do they still or should they still trust them to the extent that they do?

Well, you probably guessed my answer to that, but really what I think doesn’t matter because what the market thinks is what matters, at least for now.

Right now, the debate by the dolly birds on CNBC is around whether or not to buy these now cheaper Chinese tech stocks.

I would say a better question is if you can’t trust Chinese tech (and you clearly can’t), then pray tell, why would one trust US tech?

We are still a long way off buying China tech here as I don’t like putting out fires with my face… and that is what I think you’d be doing here. But buying US tech feels decidedly dicey as well.

So what do we do with all this?

We watch and see where these capital flows may go, and for now, we buy deep value.