(theCOVIDBLOG) GOSFORD, NEW SOUTH WALES — A 19-year-old equestrian is accepting that her life of Instagram modeling and horseback riding is likely over after caving to pressure and coercion.

Ms. Cienna Knowles received her second Pfizer mRNA injection on October 21, according to her Instagram account. Her entire existence flipped upside down later that evening. Ms. Knowles said she woke up with myriad adverse effects, including heart palpitations, muscle aches, headache, vomiting and blurred vision. She knew “something was seriously wrong” with her that night.

She went to the emergency room the next morning. Doctors discovered blood clots in her legs, stomach and lungs. Doctors also discovered internal bleeding. Rebecca Donnelly, Cienna’s mother, posted an updated three days later via Queensland Senator Gerard Rennick. The latter is one of the very few Australian politicians who tells truth about the injections. 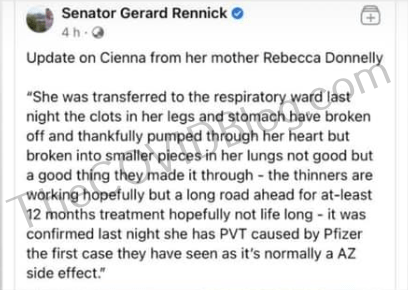 Ms. Donnelly said Cienna was diagnosed with portal vein thrombosis (PVT) – blood clots in the portal vein. The portal vein “is the main vessel of the portal venous system (PVS), which drains the blood from the gastrointestinal tract, gallbladder, pancreas, and spleen to the liver.”

Doctors admitted the obvious – that the blood clots were caused by the Pfizer injections.

“No jab, no job” ultimatum

Ms. Knowles posted another update on TikTok from the hospital. She was scared to get the shots and held off for as long as she could. “But I toughed it out and did what was right to do,” she said. Ms. Knowles reported chest pains due to the blood clots in her lungs and other adverse effects that she’s keeping private because she’s “struggling to come to terms with them.” Doctors told Ms. Knowles that she is the first person from Australia to develop blood clots after the Pfizer injections.

Ms. Knowles is on several medications, including blood thinners, to mitigate the symptoms. Doctors told her that the symptoms are likely to persist for 6 to 12 months. But Ms. Knowles said in both her TikTok video and Instagram post that this is likely her “new normal.” She’s already reminiscing about her former life from just two weeks ago. 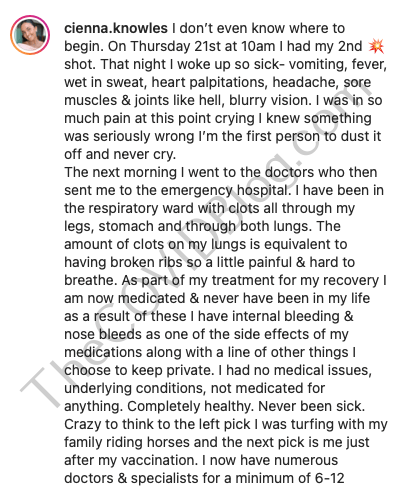 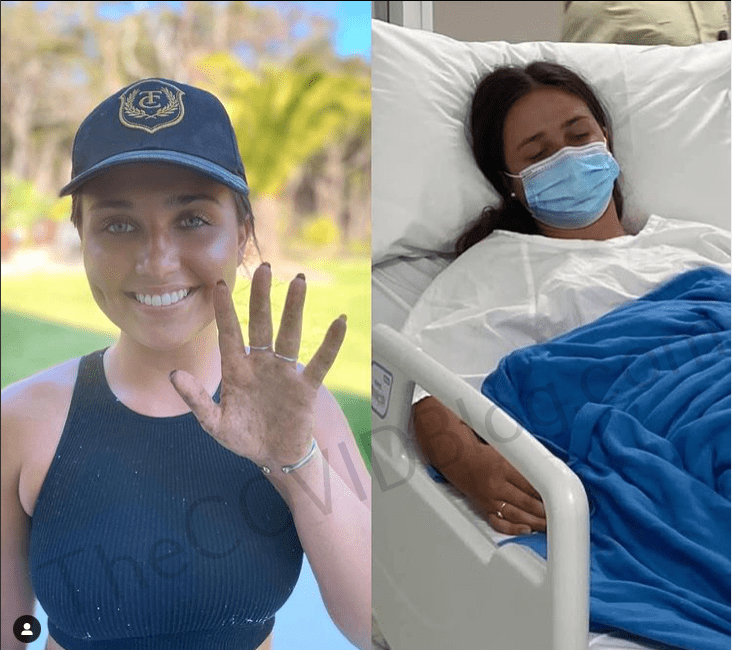 A few days later, she posted another update seeking people to take care of her horses. Ms. Knowles also conceded that she’s “at super high risk of brain bleeds,” essentially admitting that she could die at any moment. 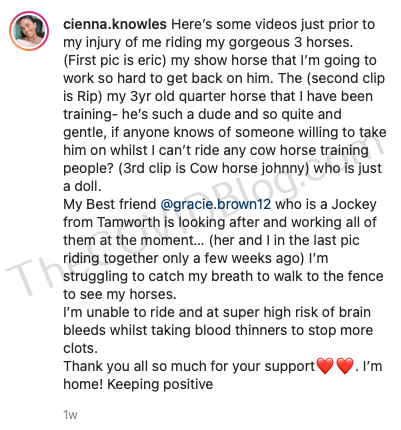 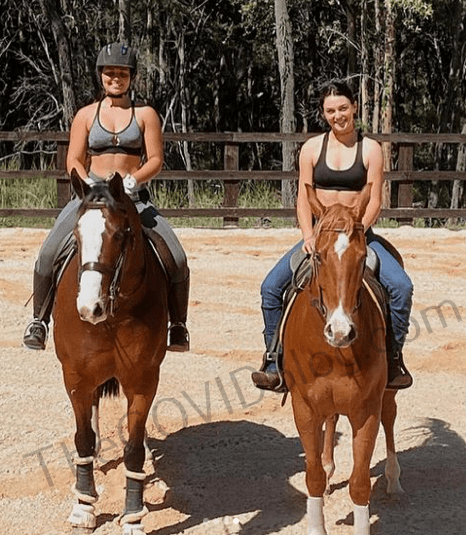 Her last update is from November 5. Ms. Knowles frequently posted swimsuit, gym and modeling photos, complete with a huge smile, prior to Pfizer. She barely looks like herself in the most recent picture. We’ll update in due course.

And that means we’ll be busy sifting through death and maiming stories down under. The creepiest part of the Australian “booster rollout” is that those who received AstraZeneca for their first two shots must get Pfizer for the third shot. Thus they’ll have both the viral vector DNA and the mRNA formulas in their bodies. As of today, this blog has yet to cover a case of mixing the two types of shots. We can only imagine what that’s going to look like.

Australia is now 80% “fully vaccinated,” according to various sources. That’s hard to believe considering they were at about 12% in July. But perhaps the vaccines equals freedom psy-op is working as planned. Prime Minister Scott Morrison is again moving the goalposts. First he said the country will re-open completely at 70% vaccination. Then he changed it to 80%. But Sydney and Melbourne have only eased restrictions by “allowing” people to eat in restaurants and re-opening schools. Cops are also still going door-to-door asking people if they know anyone who attends protests.

It seems we’re going to be covering lots of stories of individuals who caved and received the injections despite their own personal objections. Ms. Knowles is at least the fourth case in the last two weeks of someone receiving the shots to save their jobs, only to be maimed and unable to work. Bottom line is that you cannot save those who don’t want to be saved. You just have to let them meet their fates. We’re all going to start losing people close to us soon. This blogger has already lost one.

Make sure you hug all the people you love tightly this Thanksgiving and Christmas, as it could be the last time you see them as “normal.” Stay vigilant and protect your friends and loved ones.

Reap what you sow? Doctors dropping like flies in deaths described as “died unexpectedly” and “died suddenly” since mid-October

Michael Granata: 56-year-old California man dead 10 weeks after Moderna mRNA injection, warns others “don’t do it unless you want to suffer and die”