Never join the collective or let their occult capture your children.
STOP EVADING CONTROVERSY: That’s Where The Battle For Freedom Is!

(Alice Salles) Parents across America were caught unprepared for the mass closure of government schools in 2020. Soon after, however, many decided they and their children had had enough of the status quo. Now at a crossroads, will they choose reform or repudiation? 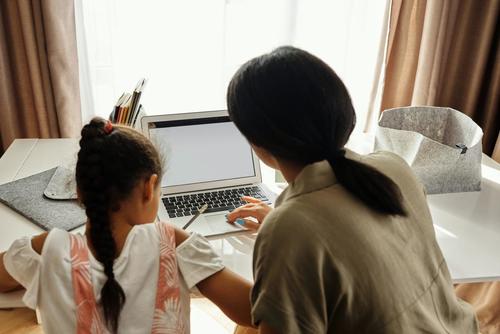 The wave of ill-advised school shutdowns last year compelled tens of thousands of parents to rethink their children’s education. When the classroom was virtually forced into their homes via Zoom, parents realized just how abysmal the curricula and tutelage were. Statistics on families fleeing to homeschooling must be worrying the education establishment.

Among black families, the increase was particularly noteworthy considering only 3.3 percent of black children were home schooled in spring 2020 versus 16.1 percent in the fall.

While legacy media focused on cases of parents keeping their kids home out of fear of covid, longtime critics of the public school system argued that the pandemic actually helped to expose parents to the abuses and shortcomings that have long plagued public education.

Some chose homeschooling, but many other parents took to school board meetings, facing the beast head-on and ripping apart the deceptive social engineering with the public comment microphone. All the glory, glitz, and glam has so far gone to the latter group.

They grew a decentralized movement with immediate political consequences not only in Virginia’s gubernatorial election but also in school board races across the country earlier this month.

Axios, the popular DC-based news outlet run by former Politico journalists, recently reported on the growth of the 1776 Project, a new political action committee focused on reforming public school systems at the local level. “My PAC is campaigning on behalf of everyday moms and dads who want to have better access to their children’s education,” the PAC’s founder Ryan Girdusky told Axios.

The 1776 Project won three-fourths of its fifty-eight races across seven states, proving the populist Right’s focus on the culture wars to be smart politicking. Now Republicans in Congress are pushing a “parents bill of rights” ahead of their 2022 primary elections. Included are so-called rights to know what’s taught at school, the right to be heard, and the right to transparent school budgets and spending.

The effects of COVID-19 on public schools: Enrollment fell by 3% in Autumn 2020 as families shifted to options such as homeschooling and private schools. Sharpest declines were in lower grades, especially kindergarten. https://t.co/rRNqVLlWkZ pic.twitter.com/ozauGgBj4t

What if, instead of pointing their collective finger at the school boards, parents looked in the mirror? What if they asked themselves how or why they feel entitled to have a place to drop their kids off for thirteen years of government brainwashing?

Any taxpayer has a perfect reason to object to school mask mandates or the teaching of racist and queer ideologies. Parents must start thinking more deeply about the situation, though.

Certainly for some, running for school board positions is their best shot at helping to provide their children and their neighbors’ children with better education. The problem is that in too many places, there’s an absolute crisis in education that can’t wait any longer for reform, no matter how severe.

Every family and community ultimately applies the Catholic principle of subsidiarity, the notion that the best way to organize society is for each action or decision to be taken at the smallest scale necessary, in assessing what must be done about things such as education.

By simply refusing to accept what federal or state authorities peddled throughout 2020, parents rightfully accepted more responsibility, clearly demonstrating that when things get personal, people will do what it takes to take back control.

Whatever step in that direction is taken, the child is better off. In his great essay “Education: Free and Compulsory,” Murray Rothbard argued that public school and compulsory schooling laws tend to victimize the child: “The effect of the State’s compulsory schooling laws is not only to repress the growth of specialized partly individualized private schools for the needs of various types of children. It also prevents the education of the child by the people who, in many respects, are best qualified—his parents.”

Unfortunately, far too few parents think of themselves as qualified, much less the best qualified educators of their children. They are easily led to believe simple reforms will “fix the system” they grew up dependent upon as children themselves.

“We always hear, Oh it’s broken. It’s not broken. It’s doing exactly what it was designed to do,” Katie Phipps Hague told Mises Institute supporters at the latest summit in Florida last month.

Hague shared her experience homeschooling her seven kids and encouraged other parents to give it a try, essentially asking, What have you got to lose?

I know this sounds like I’m a crazy person, but if you pulled your children out of school… for a whole year, then include them in everything that you do in all of your trips and all of your conversations, put them around the intelligent, capable people that you all have in your circles and let them become comfortable around those people, you’d probably do better for them than maybe anything else you could ever do.

It’s wonderful that the populist movement on the right is targeting the educational bureaucracy, one of the great roots of societal decay. There is a lot of potential for good in populism, but not if it sets its sights on mere reforms. A much brighter future lies in a libertarian populism where parents free themselves from these decrepit statist systems altogether and grow alternative institutions.

Parents must be responsible for their children’s education precisely so that children learn to be autonomous. Autonomous people don’t support tyrannical policies, so the sooner parents embrace their own power, the sooner their children will be able to unleash their own.

I NEVER KNEW YOU: THE COMING GREAT WHITE THRONE OF JUDGMENT AND HOW YOU CAN AVOID IT!