About two and a half years ago, ZeroHedge told readers China was panic hoarding food, which was several months before the virus plandemic began to spread worldwide; Beijing has since managed to stockpile more than half of the world’s maize and other grains that have resulted in rapid food inflation and triggered famine in some countries. In August 2019, ZeroHedge asked the question:

Does China believe that we are on the verge of a major global crisis? The communist Chinese government has always been very big into planning, and it appears that they have decided that now is the time to hoard food, gold and other commodities.

Fast forward today, the answer is most likely “yes.” China maintains “historically high levels” of beans and grains stockpiled at COFCO Group’s (a major Chinese state-owned food processor) 310 storage facilities in the northeastern part of the country, according to Nikkei Asia.

Qin Yuyun, head of grain reserves at the National Food and Strategic Reserves Administration, told reporters last month, “our wheat stockpiles can meet the demand for one and a half years. There is no problem whatsoever about the supply of food.”

Data from the U.S. Department of Agriculture shows China has approximately 69% of the globe’s maize reserves in the first half of the crop year 2022, 60% of its rice, and 51% of its wheat. 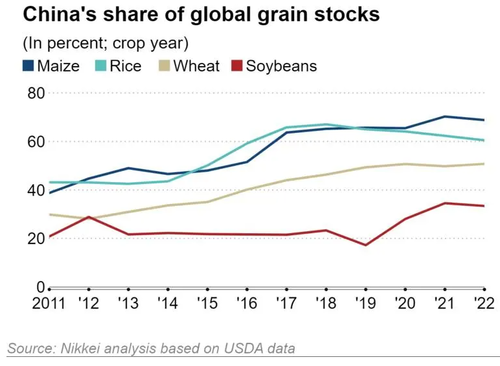 Since the Chinese plan multiple years out, we’ve pointed out how a series of disasters and weather events have likely led state officials to forecast a troublesome period of food shortages. China has already observed droughts, floods, and pests that have ruined harvests. More than 20 months of snarled supply chains due to COVID and La Nina weather patterns (second consecutive one) have also produced volatile conditions for food production.

The one thing Beijing cannot have is discontent among its citizens triggered by food shortages and or soaring prices; that’s why central planners spent $98.1 billion importing food in 2020, up 4.6 times from a decade earlier, according to the General Administration of Customs of China. For the first eight months of this year, China imported more food than in 2016. 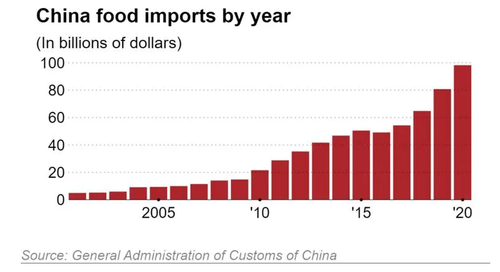 “Over the past five years, China’s soybean, maize and wheat imports soared two- to twelve fold on aggressive purchases from the U.S., Brazil and other supplier nations. Imports of beef, pork, dairy and fruit jumped two- to five fold,” Nikkei Asia said.

China’s acquisition of the world’s food supply has helped push food prices to decade highs. The U.N. Food and Agriculture Organization estimated the food price index is currently at a ten-year high.

The Ministry of Commerce has even told households to stock up on food in case of emergencies, all under the guise of the virus pandemic.

Meanwhile, Chinese state media has downplayed the notion China is headed for a food crisis. Chinese President Xi Jinping must keep food supply and prices in order to ensure food security; otherwise, discontent among citizens will increase in the world’s second-largest economy.

Nikkei Asia concludes by saying, “throughout history, food shortages have triggered popular unrest. They served as a contributing factor to uprisings that toppled Chinese dynasties.”

So without a doubt, Beijing has been stockpiling food to avoid a collapse as central bankers have yet to figure out how to print food from thin air. But don’t worry, as the global food situation worsens, we’re all likely going to be forced to eat crickets, worms, and grasshoppers.