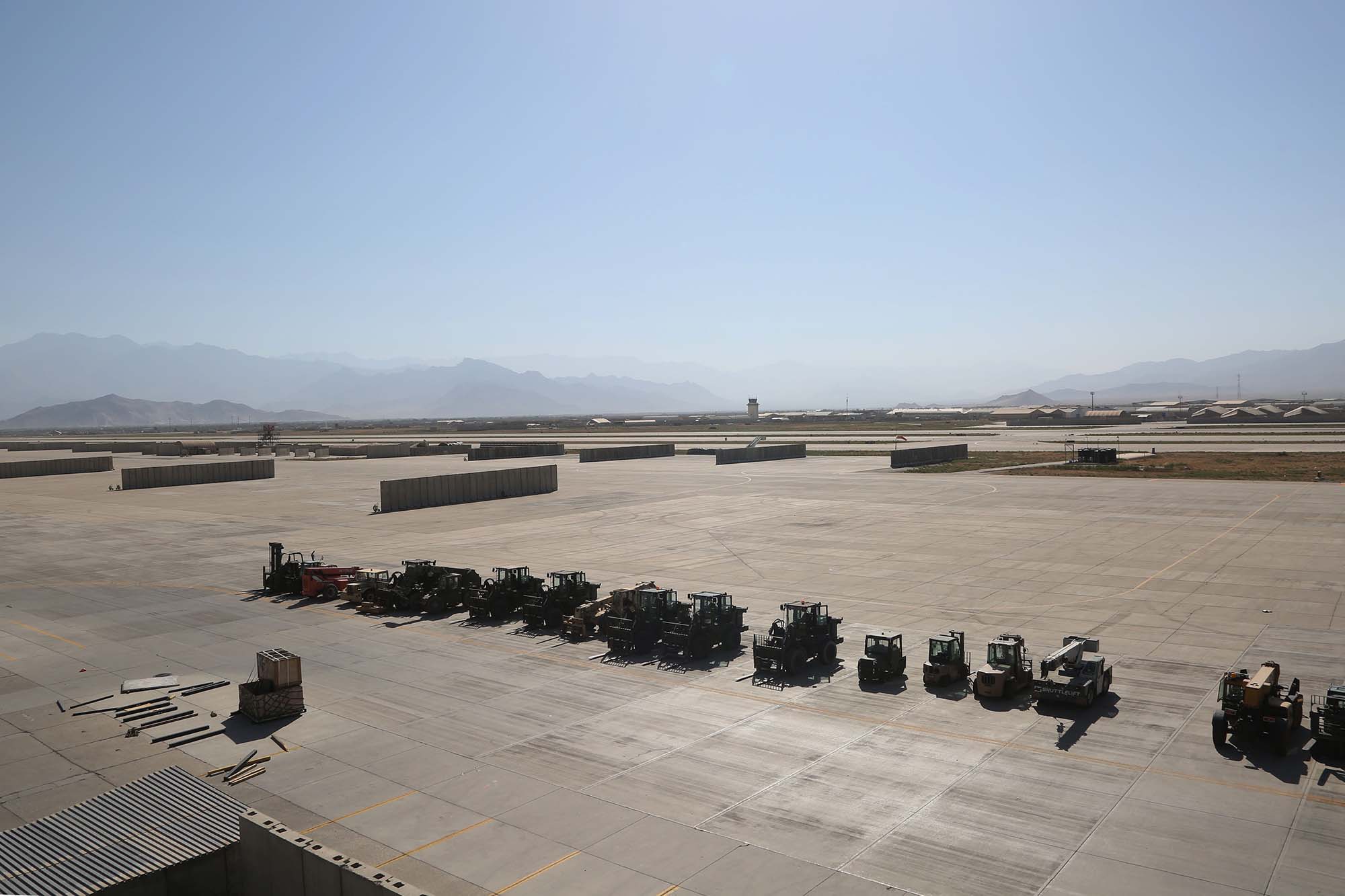 Bagram Airfield base after all U.S. and NATO forces evacuated (Xinhua News Agency via Getty Ima)

The Chinese military is currently conducting a feasibility study about the effect of sending workers, soldiers and other staff related to its foreign economic investment program known as the Belt and Road Initiative in the coming years to Bagram, according to a source briefed on the study by Chinese military officials, who spoke to U.S. News on the condition of anonymity.

A spokesman for the Chinese Foreign Ministry on Tuesday issued a carefully crafted denial of plans for an imminent takeover of the military airfield roughly an hour from Kabul, first established by the Soviets during their own occupation in Afghanistan and which at the height of the U.S. military presence there was its busiest in the world.

“What I can tell everyone is that that is a piece of purely false information,” Wang Wenbin told reporters Tuesday morning. China has repeatedly denied many of its other military deployments beyond its borders.

However, the current consideration in Beijing is not for any pending movements, rather a potential deployment as long as two years from now, the source says. And it would not encompass taking over the base but rather sending personnel and supplies at the invitation of the government in Kabul – and certainly after the Taliban secures its rule.

In addition to expanding its regional influence, Beijing’s potential plan for Bagram would also amount to a devastating blow to the image of the U.S., which increasingly considers China its most pressing and challenging global threat.

“Given their past experience, the Chinese must be eager to get their hands on whatever the U.S. has left at the base,” says Yun Sun, director of the China Program at the Stimson Center think tank.

Beijing has already recognized the geostrategic importance of Bagram overtly. Its state media almost immediately hopped on the sudden and surprise U.S. departure from the key logistics hub in July, sending a video crew, which gained easy access to it, to document the aftermath of what it described as a “hasty withdrawal” and “humiliating defeat.”

China’s latest consideration matches well-worn practices it has perfected in recent years to quietly expand its economic and military influence beyond its borders under the guise of infrastructure investment projects. ADVERTISING[

For example, the People’s Liberation Army – the official name for China’s entire military – has reportedly secured exclusive rights to roughly a third of the Ream Naval Base in Cambodia in recent years though an expansion there it’s backed.

In Myanmar, it has provided radio, radar and other military equipment to the local junta on the Coco Islands, an archipelago roughly 250 mile south of Yangon where China has reportedly held leasing rights for the last three decades.

Beijing has claimed its presence there does not amount to a military base, even though all the equipment, maintenance and training taking place there originate from China.

And it has employed similar tactics in neighboring Pakistan, with which it has bolstered a new security and intelligence-sharing arrangement in recent years, as first reported by U.S. News.

The Taliban’s revelation Tuesday that its newly formed government will include as interior minister Sirajuddin Haqqani, the scion of the notorious Pakistan-based Haqqani Network terrorist group for whom the FBI is offering a $10 million reward, has further bolstered Islamabad’s position as a conduit between China and its ambitions in Afghanistan.

China likely could achieve its latest ambitions for Bagram through help from Pakistan, Sun says, adding, “But if feasible, I am sure they would like to cut out the middleman.”

“If the Taliban requests Chinese assistance, I think China will be inclined to send human support. Most likely, they will frame it as technical support or logistic support. There are precedents of that regarding foreign military bases. But a Chinese takeover is unlikely,” she says.

Seemingly in anticipation of the U.S.-backed government’s collapse, China in August began making preparations to embrace the Taliban as the rightful government in Kabul were it to seize power, U.S. News first reported, clearing the way for the kind of friendly relations that would allow for such deployments to take place.

It, along with Russia, conspicuously abstained from voting on a recent U.N. Security Council resolution calling on the Taliban to, among other things, allow safe passage out of Afghanistan for those who wish to flee.

Indeed, the sole overseas military facility that China acknowledges is its expeditionary air base in Djibouti, near a similar airfield run by the U.S. that both countries use to launch drones and conduct other covert and intelligence operations in and around the Horn of Africa and Gulf states.

China has previously downplayed its presence in Djibouti and flatly rejected the notion that its other overseas posts amount to military bases, a likely sign that the current policy of the Chinese Communist Party would not allow for an overt occupation at Bagram.