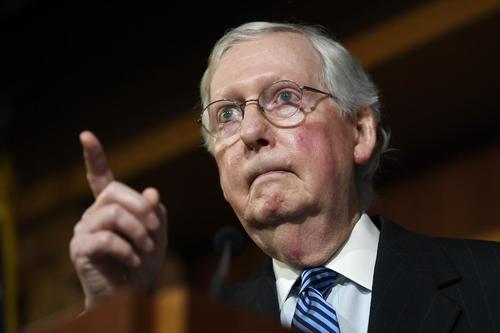 Offering yet another reminder of just how badly mismanaged the war in Afghanistan actually was, Senate Republican Leader Mitch McConnell said Wednesday that “there isn’t going to be an impeachment” of President Joe Biden over the botched withdrawal of US troops and civilians from Afghanistan.

McConnell’s remarks came nearly a week after a suicide bombing attack outside the Kabul Airport killed more than a dozen Marines and wounded nearly 200 people (mostly Afghans). ISIS-K, the organization that claimed responsibility for the deadly explosion, is known as Islamic State Khorasan or ISIS-K. Here’s more according to CNN.

“I think the way these behaviors get adjusted in this country is at the ballot box,” said McConnell at an event in Pikeville, Kentucky. “The President is not going to be removed from office with a Democratic House and a narrowly Democratic Senate. That’s not going to happen.”

Wow, the President of the United States had a call with a foreign leader where POTUS asked the leader to lie on his behalf, and promised military assistance if he did as he was told. Do I have that right?

— Ben Domenech (@bdomenech) September 1, 2021Some Republicans, including Tennessee Sen. Marsha Blackburn, Sen. Josh Hawley of Missouri  and South Carolina Sen. Lindsey Graham, have since said that the President should resign or face impeachment.

Biden has repeatedly defended his decision to withdraw US troops and praised his administration for doing a superlative job on the withdrawal, which he insisted would have been a disaster no matter what. But so far at least it looks like the American people aren’t buying it. While he’ll most likely get to keep his job (for now, at least), the disaster could lead to Democratic losses in the coming midterms that could see Republicans retake the House, and possibly the Senate, too.

And remember, it’s not just the botched withdrawal effort that has people up in arms: Biden’s decision to hand over what amounts to a “kill list” of America’s Afghan allies also has infuriated many conservatives, leading some lawmakers to call for his impeachment.

50% Of Americans & 33% Dems Think Biden
Should Resign Over Afghanistan Exit, But Many
Worry The Kamal Is No Better